Zhou fends off Aron to complete hat-trick at Monza 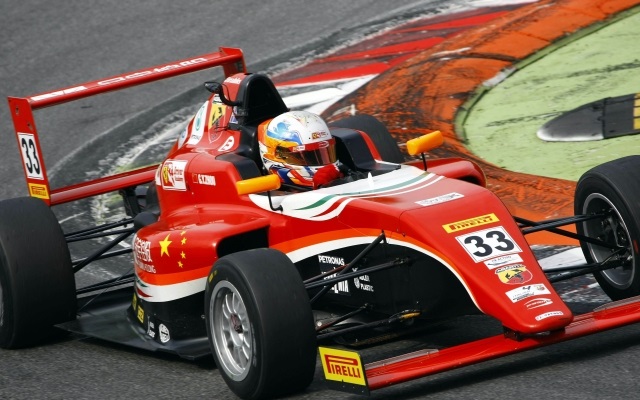 Ferrari junior Guan Yu Zhou celebrated a treble of race wins in his only second car racing weekend of his career in Italian F4 at Monza.

The 16-year-old had a storming start to convert his pole into the lead but the race was almost immediately neutralized when two separate incidents brought out the safety car.

Starting from third, Aron made small contact with Robert Shwartzman and David Beckmann in the first two chicanes respectively, leaving the latter with a broken suspension, but the Estonian’s car miraculously stayed intact and he only dropped down to sixth.

Another incident involving multiple retirements started with Alex Peroni being spun around the second chicane with several others such as Julia Pankiewicz, Kikko Galbiati, Fernando Madeira and Ali Al-Khalifa piling up behind his car.

Zhou stayed first ahead of Lando Norris after the restart and the duo started to pull away, soon joined by the quickly-recovering Aron.

He quickly found a way past Norris as well and although he was all over Zhou in the closing stages, he settled for second.

Norris completed the podium with Shwartzman taking fourth after passing Mauricio Baiz, who failed to make it to the top ten, having been taken out by Bar Baruch later on.

Rowland in control in second Formula Renault 3.5 race at Spa

Will Palmer takes another clear win in race three at Silverstone