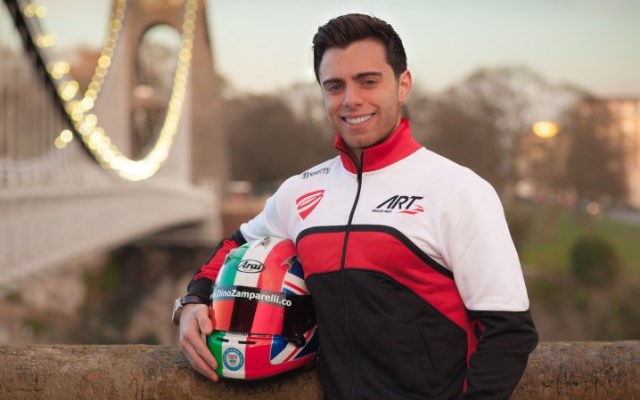 The British driver moves across from the Marussia Manor team, for whom he scored points in half of last year’s 16 races with a best finish of seventh.

He finished up 18th in the final standings, one spot behind new ART team-mate Alex Fontana. He won the Ginetta Junior and Formula Renault BARC titles in 2008 and 2011 respectively, and competed in Formula 2 in 2012.

The French squad has claimed the teams’ titles in every year of GP3 so far, but after winning drivers’ titles in 2010 and 2011 with Esteban Gutierrez and Valtteri Bottas, has missed out in the previous two seasons to rivals from Arden.

“Signing for ART Grand Prix is a massive move,” said Zamparelli. “I’m so excited to get to race for a team with so much history.

“Around half of the current crop of drivers in Formula 1 have come through the ART team. In GP3 they’ve won four titles in a row so they are clearly getting something right.

“The aim is simple, to go and win as many races as possible and ultimately take the championship crown at the end of the year. With a team like ART and with my experience in GP3 last year, I feel we’ve got all the right ingredients to do that.”

Martin Griffiths of Zamparelli’s backers Bristol Sport added: “It is fantastic news for Dino to have signed with ART Grand Prix. They are the team to be with and we hope it will help him achieve his true potential.”

ART have one seat remaining in their GP3 line-up for 2014, with Emanuele Zonzini a potential candidate having tested with them for two winters running.

iSport to run Russian Time, Evans and Markelov to drive