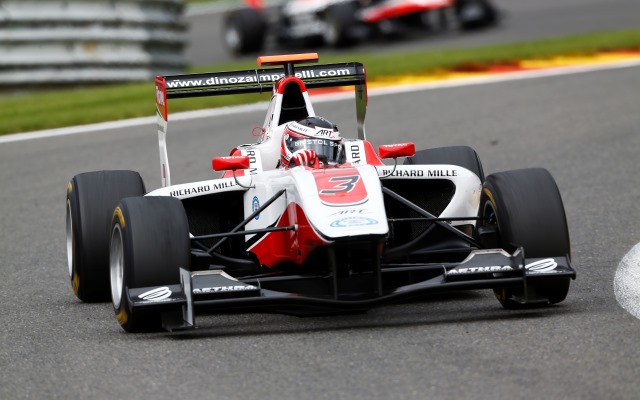 For the second GP3 round in a row, Dino Zamparelli led an ART lockout of the top three places in free practice at Spa-Francorchamps, but the main point of note in the session was a significant aerial crash for series debutant Konstantin Tereshchenko.

In his very first outing in a GP3 car as one of three new drivers that the Trident team has brought in for this weekend, Tereschchenko lost control approaching the final chicane. He slid sideways across the inside of the corner, and took off into the air off the kerb. His car rolled, came to rest against the tyre barrier and set on fire.

The 20-year-old Russian driver, who currently sits sixth in the standings in the Euroformula Open, appeared to quickly escape unharmed.

Light rain hitting the circuit during the session meant that the quickest times were set early on, with Zamparelli leading his two team-mates, just as was the case last time out in Hungary. On this occasion, Marvin Kirchhofer beat Alex Fontana to second place by two hundredths of a second. Zamparelli was 0.351s clear out front.

The ART trio demoted championship leader Alex Lynn to a best-of-the-rest position in fourth, with the Red Bull Junior’s Carlin team-mate Emil Bernstorff next up in fifth. Matheo Tuscher was sixth ahead of Nick Yelloly and Jimmy Eriksson. Richie Stanaway, a winner at Spa on his GP3 debut in 2011, was ninth with Patrick Kujala completing the top ten.

Tereschchenko was 22nd fastest of the 27 runners, with his fellow Trident recruits Luca Ghiotto and John Bryant-Meisner 13th and 21st respectively. Kevin Ceccon, returning to the series with Jenzer, was 20th and one spot behind Ryan Cullen, who brought an early end to the session with an incident in heavier rain following the stoppage for the Tereshchenko clear-up operation.

Lappalainen secures win in 1.6 Nordic race one at Ring Knutstorp