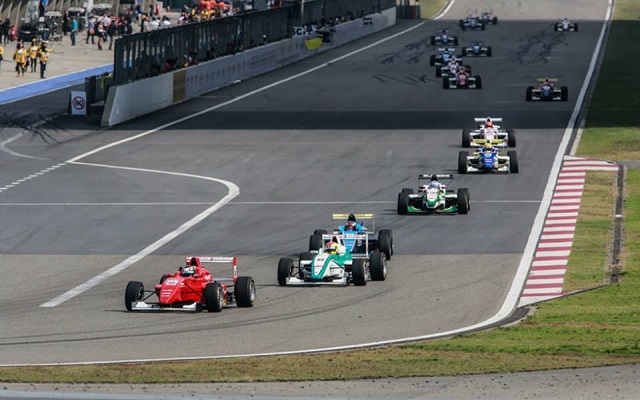 Aidan Wright‘s victory in the final race of the 2013 Formula Masters China season at Shanghai has ended up giving him the championship title after his teammate Afiq Ikhwan was penalized post-race.

Akash Nandy started the race from pole, but his challenge for race victory was cut short on lap two, when he was forced into retirement due to a fuel pump issue.

With the leader sidelined, it was Wright who set the pace, as the Australian worked his way into the race lead after starting in fourth place. Having worked his way around Tanart Sathienthirakul and then his Meritus teammate Ikhwan early on, Wright went on to take his sixth win of the year.

Wright’s win did not guarantee him the title as Ikhwan could level him on points by securing the runner-up spot, which would then see the Malaysian take the title on second-place finishes. Ikhwan managed just that, managing to keep Sathienthirakul at bay, but ended up making contact with the Thai racer in the process, damaging his front wing on the final lap.

As such, any title celebrations were delayed as both title contenders were under investigation – Ikhwan for the incident with Sathienthirakul and Wright for allegedly overtaking his teammate under yellows. The stewards cleared the Aussie, who then suddenly found himself the champion, as Ikhwan was demoted to third in the classification.

Matthew Solomon and Dan Wells completed the top five in the race. Ren Nagabuchi was sixth, leading his teammate Yin Hai Tao and Eurasia’s Pu Jun Jin, while Raj Bharath and Chang Wing Chung made up the rest of the top ten.