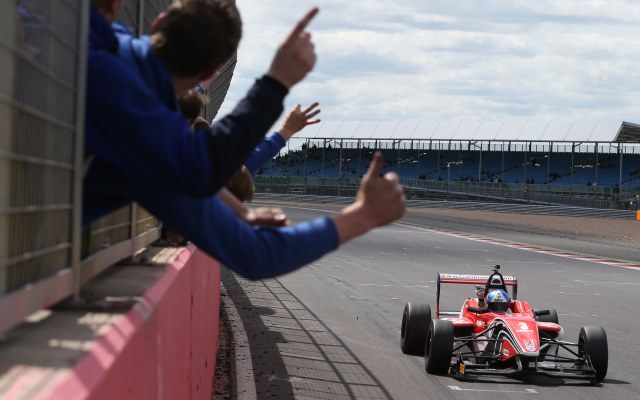 Will Palmer has slashed the gap to the BRDC Formula 4 championship lead with a commanding lights-to-flag win in race one at Silverstone.

After claiming pole by almost a second in qualifying, Palmer opened up a two-second lead on the first lap of the race as HHC team-mate Harrison Newey was dumped down to sixth place.

Palmer set a new lap record on the third tour, and extended his gap over second-placed Ciaran Haggerty to 5.8s before the end of the 10-lap race.

The result cut Palmer’s deficit to standings leader Chris Mealin from 37 to just seven as Mealin finished back in 16th. He had qualified 15th and although he made progress on the opening lap, he then suffered front wing damage.

Lanan team-mate Rodrigo Fonseca rose from fifth to third at the start but pitted with damage on lap four and finished up a spot ahead of Mealin.

Newey recovered from his poor opening lap to re-pass Jordan Albert, Fonseca and Riki Christodoulou to take third by the end of lap four but then made contact with experienced racer Christodoulou, with both spinning out of the race.

That put Silverstone local Jordan Albert up into a third place he would hold until the end. Tom Jackson was fourth ahead of Sisa Ngebulana and Jack Bartholomew, while Omar Ismail enjoyed a strong debut race to finish seventh.

The top 10 was completed by Hernan Fallas, Fernando Urrutia and Zubair Hoque.

Vaxiviere fights back to claim Spa win after slow start

Ilmari Korpivaara wins at Anderstorp from fifth on the grid