Vieira stays in Italian F4 for a second year 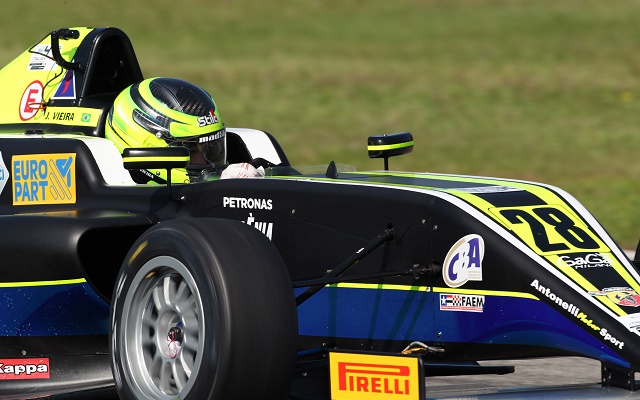 Joao Vieira will return to Italian F4 for a sophomore season with Antonelli Motorsport, it’s been confirmed.

The Brazilian, who is managed by Giovanni Minardi, had a promising debut single-seater campaign last year, ending up in seventh in the standings with a podium at Monza and two fastest laps in the final two races of the season.

He then went on to take a victory and a second place in the Italian F4 Adria Winter Trophy.

?I?m really happy to be back behind the wheel,” said Vieira. “Last year I had to get to know everything quickly: the team, the car and the tracks. This year, instead, I will have the opportunity to make the most of all the work done in year one.?

?I am glad the engines are finally getting switched on,” added Minardi. “After the positive experience of 2014, I am sure that this year will be successful for Joao and he can fight for the championship.?

Preparations for the forthcoming season started well as the Brazilian topped both days of pre-season testing at Vallelunga last weekend.

Vieira is the fifth confirmed driver of the 2015 Italian F4 grid, with another Vallelunga frontrunner Marino Sato?set to be announced with Euronova shortly.