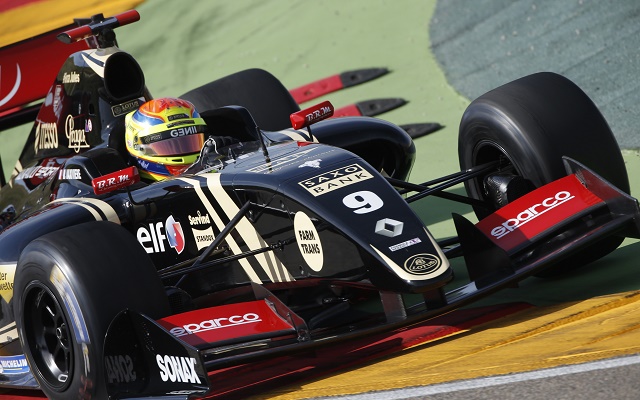 Lotus driver Matthieu Vaxiviere confirmed the legitimacy of his pre-season pace by claiming pole position for the Formula Renault 3.5 opener at Aragon.

Vaxiviere, who claimed his two wins in FR2.0 at this track, remains unbeaten in the FR3.5 opener so far, having also topped both practice sessions.

But his pole was far from a sure thing as he edged newcomer Gustav Malja by just 0.025s in the end.

Malja moved into the lead with two minutes to go and Vaxiviere initially could not match his time. However, he improved with the subsequent lap, crossing the line with seconds left on the clock and taking pole away from the Swede.

Oliver Rowland had a chance to beat the leading duo after the checkered flag but had to settle for third, ahead of Vaxiviere’s teammate Meindert van Buuren, whose Lotus debut yielded his best qualifying result in the series in.

Malja’s squadmate Tio Ellinas will get his debut FR3.5 race underway from eighth, with Nicholas Latifi and Nyck de Vries rounding out the top ten.

Last year’s race winner Roberto Merhi has qualified 13th for his first race with Pons, a second off Vaxiviere.