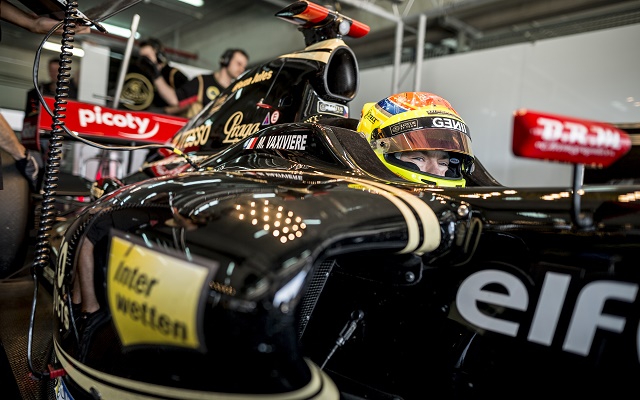 After failing to convert his maiden pole into victory on Saturday, Matthieu Vaxiviere rebounded with a career-first win in race two of the Formula Renault 3.5 opener at Motorland Aragon.

Following a lengthy rain stoppage, Vaxiviere trailed poleman Nyck de Vries , but caught up and pulled off a shock overtake into the penultimate corner on the final lap.

A 20-minute delay followed but the weather conditions finally eased up and, as the cars were fired up in the pitlane, Vaxiviere did not get going.

Passed by four cars, the Frenchman started moving and was allowed to return to his spot under the safety car.

The race was finally green with 21 minutes to go, de Vries dramatically slowing up the field at the restart and then sprinting off.

His lead after one lap was an astonishing four seconds and a half, but Vaxiviere then found his rhythm and started closing in.

While the leaders were happy with staying out and setting the pace, a number of backmarkers took to the pits early for the mandatory stop. But the strategy gamble did not reap much in the way of benefits, as they could not match the pace of those out front upon rejoining.

With ten minutes to go, British frontrunners Oliver Rowland and Dean Stoneman hit the pitlane, the former’s Fortec teammate Jazeman Jaafar having opted for the switch earlier. Rowland had the quicker stop and rejoined safely in the clear of both, remaining set for a provisional third.

De Vries and Vaxiviere, now just two seconds apart, both came in on the next lap and remained in position on pitlane.

Vaxiviere took a second out of the leader during the outlap, but initially struggled to get close enough to de Vries to mount a proper challenge.

Yet, as the clock hit zero, he was all over the McLaren junior, attempting to take the lead around the outside into the hairpin during the final lap.

The Dutchman was very conservative on the braking and let Vaxiviere alongside. Exiting the corner and with the Frenchman set for the inside in the final turn, the McLaren junior then tried to squeeze Vaxiviere off.

There was contact between the two but Vaxiviere was unfazed, moving along and emerging as the leader on the main straight to take the checkered flag.

Jaafar was eighth, with Alfonso Celis celebrating a maiden points finish in ninth and Roberto Merhi salvaging a point from the weekend in tenth.

UPDATE: Stoneman and Egor Orudzhev were penalised for speeding in the pitlane. Stoneman has been demoted to 12th, promoting Bruno Bonifacio to a maiden point in the series. Orudzhev was classified P19.