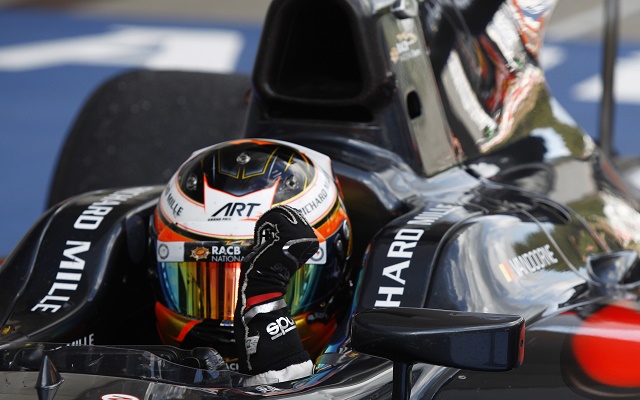 The Belgian has now won the last five feature races held in the series, his streak starting in last year’s Abu Dhabi finale.

Vandoorne wasn’t the quickest at the start and neither was his teammate Nobuharu Matsushita‘s as the Japanese driver was passed by Sergey Sirotkin for second place.

Behind them, Pierre Gasly was slow off the line and ended up damaging his front wing over the course of the opening lap. Eventually, a piece of his wing flew off, falling right on the racing line on the main straight and bringing out the virtual safety car.

The top three all managed the restart well but there was a bit of chaos behind, with Nick Yelloly and Raffaele Marciello bogging down in fourth and fifth and allowing Gasly through.

As the Brit retook the spot from Gasly, Alexander Rossi, who qualified only 12th, then fought through to take fifth off the Frenchman.

It was then that the frontrunners, most of who started on the option tyre, came into the pits for the mandatory stop.

Vandoorne was among the first takers and his stop was far from spotless, with a delay on one of the tyres.

Sirotkin and Matsushita followed the lap after, the Russian having to chop across the Japanese driver in the pits to keep his spot. That would lead to Rapax being investigated for an unsafe release later on, but the team would be found blameless.

Both Sirotkin and Matsushita actually rejoined ahead of Vandoorne, but were on colder tyres. The Belgian passed his Japanese teammate with little resistance and was soon right on Sirotkin, ultimately completing the pass next time by through Castrol Edge.

With the trio leading the early stoppers, Gasly, nursing damage, was holding up the pack out front. After some fighting behind him, his teammate Alex Lynn emerged second and was soon on the radio, furious at Gasly blocking his overtaking attempts.

Soon enough, the Briton was through with a late dive into T1, with Gasly then also passed by Artem Markelov.

In the middle of the field, Vandoorne caught traffic in the form of Daniel de Jong and Simon Trummer, who were fighting it out for position. The Belgian tried to pass them around the outside and was nearly made to regret it as they went three-wide and he was briefly forced off.

He quickly recovered, passing de Jong and then Trummer in quick succession and finding clean air.

At that point, all eyes were on Lynn and Vandoorne as the duo took turns posting the fastest lap of the race.

With Vandoorne beginning to gain a few tenths per lap, Lynn came in, rejoining behind Sirotkin but ahead of Rossi, who had worked his way around Matsushita.

On colder tyres, he slipped behind both of them and watched Matsushita pull off a brave overtake for third place into turn six.

With the whole field now having stopped, Vandoorne was back in front and absolutely checking out, seemingly unaffected by any sort of degradation.

The Belgian would end up finishing a whopping 12 seconds clear of Sirotkin, who brought the car home for his personal-best finish of second.

Lynn, meanwhile, quickly worked his way around Rossi into Remus and, on the next lap, eased past Matsushita with DRS even before Schlossgold.

The Japanese driver settled for fourth – his best finish in the series so far – with Markelov overtaking Rossi for fifth.

Rio Haryanto took seventh ahead of Yelloly, Arthur Pic and Robert Visoiu. The latter, however, was found to have been speeding in the pits and gave up tenth to Mitch Evans, who made it the first time this season that both Russian Time cars were in the points.