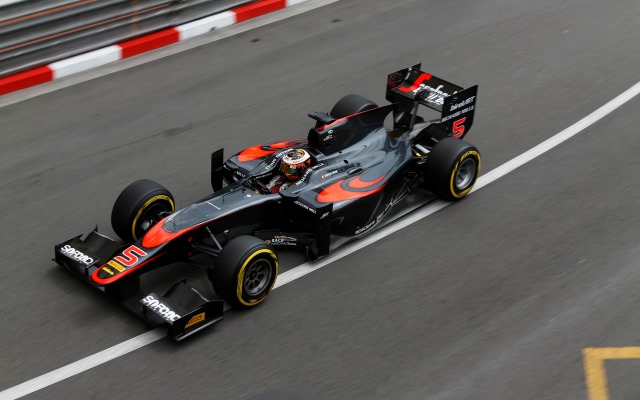 Stoffel Vandoorne made it three wins out of three in GP2 feature races in 2015 as he beat Alexander Rossi out of the pits to triumph in Monaco.

After Raffaele Marciello had made a fast start to head the opening laps prior to pitting to ditch his supersoft tyres, polesitter Rossi then led his fellow soft rubber-shod driver Vandoorne into the middle of the race.

The first of two virtual safety car periods handed the advantage to those who had yet to pit, enabling them to make a stop while the opposition was running slow.

It meant that Rossi and Vandoorne pitted together, but a quicker turnaround from the ART crew got their man out in front.

Both drivers had to make their supersoft tyres last for the second half of the race while running nose-to-tail, but moved 10 seconds clear of third-placed Julian Leal, who was on the same tyres and holding up soft tyre runner Arthur Pic.

The Frenchman had been inbetween Rossi and Vandoorne at the start before pitting a lap later than Marciello, allowing him to jump the Italian, but any hopes of catching the leaders late on were further dented by a bold move at Sainte Devote from Sergio Canamasas, another driver on the supersofts.

The fight for the win was therefore between Vandoorne and Rossi, and the Belgian managed to maintain pace better at the end to win by six seconds and extend his championship lead.

Leal was given a 10-second penalty for an unsafe release at his pitstop, in which he made contact with the car of Sergey Sirotkin that he had followed into the pits.

That dropped him to sixth and promoted Sergio Canamasas to a second consecutive Monaco podium finish after the Spaniard held on in front of Pic. Sirotkin dragged a damaged car home in fifth.

Richie Stanaway was seventh ahead of Marciello, who will get a second shot at victory with reverse grid pole for Saturday’s sprint race. The top 10 was completed by Jordan King and Nick Yelloly, who survived a hit from Mitch Evans at the chicane in the incident that triggered the first VSC to score his first GP2 point.

The VSC was used for a second time later in the race to retrieve a small part of front wing from the middle of the track on the exit of the Swimming Pool complex.

The start of the race had been aborted amidst chaotic scenes in which Nobuharu Matsushita stalled and then so did Stanaway as he passed by, blocking the track. A second formation lap was completed but teams were then allowed back on the grid and original positions adopted, except Pierre Gasly was sent to the pits for jumping the original aborted start.

Matsushita would take himself out of the race after contact with Daniel De Jong at the chicane, while Marco Sorensen was eliminated by contact at the hairpin from Norman Nato.