Tunjo fights through to take GP3 sprint victory at Spielberg 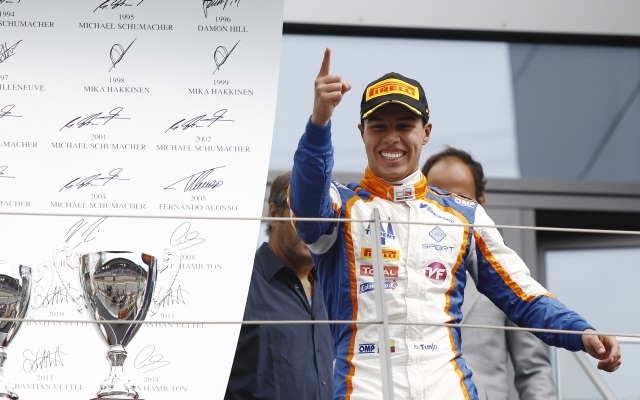 Trident Racing’s Oscar Tunjo was victorious in the GP3 sprint race at Spielberg, completing a weekend sweep for the Italian team

Having started in ninth, the Colombian rookie was the best at preserving his tyres throughout the race and easily overtook the frontrunners in the final laps.

Off the line, pole-sitter Ralph Boschung maintained his lead but came under massive pressure from Marvin Kirchhofer right away.

Their fight did not last long though, as right behind them Antonio Fuoco‘s missed the braking point at turn two, tagging Jann Mardenborough‘s car and then crashing Sandy Stuvik out of the race as well.

With another incident prior to that between Alex Palou and Alfonso Celis at turn one, an inevitable safety car period followed.

Boschung managed to briefly hold on to the lead after the restart but soon found himself in third place behind ART duo of Kirchhofer and Esteban Ocon.

The Swiss soon started to struggle for pace and eventually ended up tenth.

The first to challenge the leading ART duo was yesterday’s winner Luca Ghiotto, yet spending a couple of laps behind Ocon cost him traction and he was not able to continue his attack.

Tunjo meanwhile, was eighth after the safety car restart but soon started to make up positions and quickly found himself in fourth behind fellow Trident driver Ghiotto.

Overtaking his teammate as well as Ocon was no problem and the Colombian was all over Kirchhofer with three laps remaining.

Although the German put up a fight, defending the inside line at Remus, the 19-year-old had such an advantage in traction that he went around the outside to claim the lead.

He then cruised to the chequered flag to take his first victory in his only fourth GP3 race.

The podium was completed by Kirchhofer and Ocon, while Ghiotto managed to stay in fourth, as he had to aggressively defend from Emil Bernstorff in the final lap.

Matheo Tuscher and Seb Morris both completed good recoveries to finish sixth and seventh, despite having started from 12th and 19th respectively.

The final point-scoring position went to Alex Fontana in eighth, while the top ten was completed by Koiranen’s Matt Parry and Boschung.

UPDATE: Ocon and Tuscher both have been excluded from the race for non-conforming undertray height dimensions and therefore lost their third and sixth positions respectively. Ghiotto inherits the final podium spot.