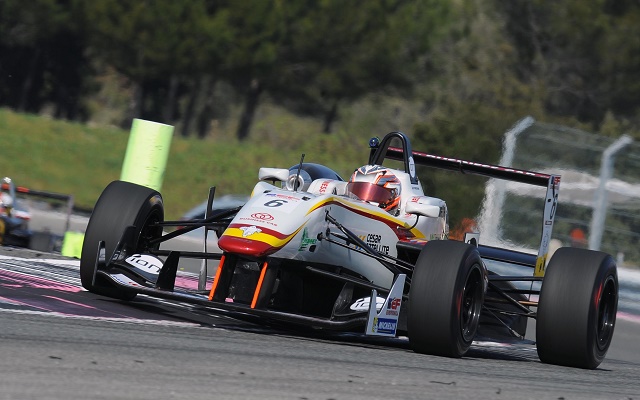 Campos Racing’s Konstantin Tereshchenko picked up his second Euroformula Open victory in the final race of round two of the 2015 season at Paul Ricard.

Despite starting from pole, the Russian was forced to spend ten laps second to Vitor Baptista, but eventually managed to retake first place.

While Tereshchenko kept his lead off the line with at the start, fellow front row driver Vitor Baptista was somewhat sluggish with his getaway and let teammate Damiano Fioravanti through into second.

There was contact behind them when Yarin Stern hit Henrique Baptista from behind and caused a ripple effect which saw Diego Menchaca and Igor Walilko collide as well.

But the race stayed under green and Vitor Baptista quickly retook the second spot from Fioravanti.

The Brazilian then immediately reeled in Tereshchenko and passed him into the chicane in the middle of the Mistral straight. Further back, Alessio Rovera cleared Fioravanti for P3.

Right after the lead changed, the safety car was called out to remove Menchaca’s stricken car.

After the restart, Dzhon Simonyan, recovering from an early spin, attempted a move on Henrique Baptista into turn one. The Campos driver tried to squeeze him off-track and Simonyan went over the rumble strips, bounced in the air and collected the Brazilian driver.

The top three, meanwhile, remained unchanged, albeit Rovera came extremely close to passing Tereshchenko before the Russian could shake him off.

After defending second, Tereshchenko ramped up the pace and caught right up with Vitor Baptista over the next few laps. They were side-by-side exiting the final corner on lap 12 but Vitor Baptista kept the inside line.

However, Tereshchenko seemed to be much quicker and was easily through on the Mistral straight.

He didn’t immediately pull away into the distance, but hardly seemed under pressure over the remaining laps, cruising to his second win.

William Barbosa prevailed in a race-long fight with Yu Kanamaru to claim sixth, with Tanart Sathienthirakul and a recovering Stern in eighth and ninth.

Despite the incidents, Henrique Baptista brought the car home in tenth place.