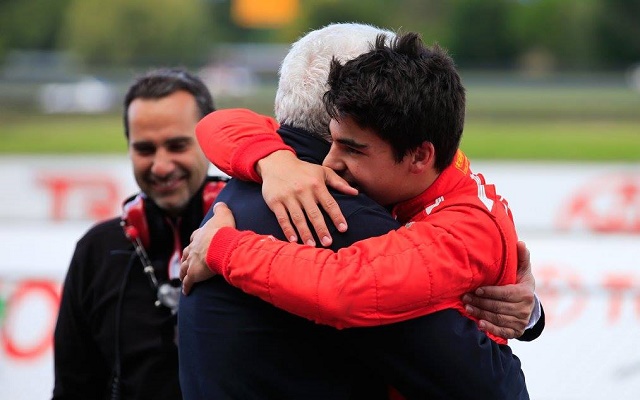 A mid-race collision between leader Arjun Maini and Brandon Maisano paved the way for Toyota Racing Series champion Lance Stroll‘s victory in the final race of the season.

The Canadian started the race in fifth, but stayed cool and collected over the 35-lap race to emerge as winner.

After losing his title chances earlier today, Maini lined up on pole, with Scotsman Sam MacLeod alongside and Maisano right behind.

While the top three remained in position off the line, Stroll went around teammate Charlie Eastwood, moving up to fourth.

They did not get the chance to settle into a pace as an off from ETEC’s Callum Ilott brought out the safety car and then saw the race suspended.

After the restart, Maisano moved up to second, with Stroll, Eastwood and Sergio Sette Camara passing MacLeod shortly thereafter.

Maisano then began to close in on his leader teammate, taking out a few tenths each lap. His first attack was successfully defended by Maini and allowed Stroll to get within a second of the two.

As such, the Canadian was there to reap the rewards when Maini and Maisano came together a couple of laps later. The Frenchman rejoined in third, also behind Eastwood, while the Indian had to visit the pits for repairs.

Now in the lead, Stroll still had a fair amount of distance to cover, but he kept his composure, maintaining a second over Eastwood for the remainder of the race.

The BRDC F4 graduate finished his breakthrough campaign with a third podium finish. Behind him, Maisano made up the top three, clinching the runner-up spot in the standings and handing M2 Competition a 1-2-3 finish in the prestigious race.

When Sette Camara hit trouble, MacLeod moved back up the order, eventually winding down fourth. Santino Ferrucci beat teammate Artem Markelov and Matteo Ferrer to fifth and, in doing so, secured third in the championship.