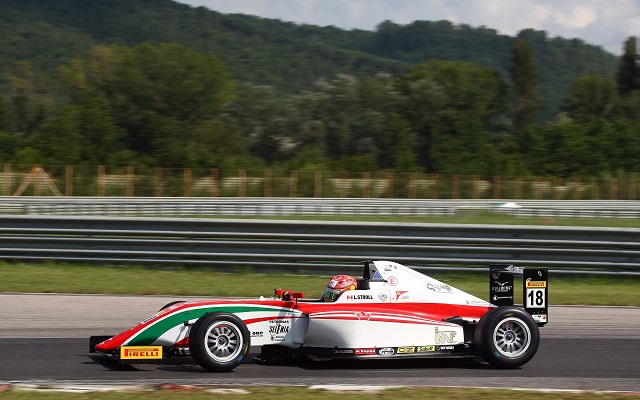 Canadian racer Lance Stroll recorded his fifth victory of the Italian F4 season in the opening race of round four at Magione.

Stroll managed to narrowly keep his teammate Brandon Maisano at bay off the line and then proceeded to set the pace out front in a controlling fashion, managing the gap to the Frenchman.

Maisano kept within a second of the race lead over the opening laps of the race, but soon eased off, settling for a second-place finish.

Arguably the most heated battle in the field unfolded behind the Prema duo as Mattia Drudi chased Euronova’s Leonardo Pulcini for third.

Pulcini managed a better start to take P3 from Drudi on the opening lap, but then had to withstand race-long pressure from the F&M racer.

At one point in the race, Drudi managed to briefly edge ahead of Pulcini through the esses, but the Euronova driver then pulled off a very forceful move and took the spot back.

Drudi continued to shadow Pulcini throughout the remainder of the race, but couldn’t find a way through again, allowing the Euronova racer to complete the podium.

Jenzer’s Alain Valente profited from offs by Andrea Fontana and Andrea Russo ahead of him to secure fifth place. Ivan Matveev, who was right on Valente’s tail and looking at sixth place, ended up beached in the gravel with two laps to go.

As such, it was Joao Vieira who took sixth, narrowly keeping Russo behind. Israeli driver Bar Baruch was eighth, while series debutant Matteo Desideri and a recovering Fontana completed the top ten.