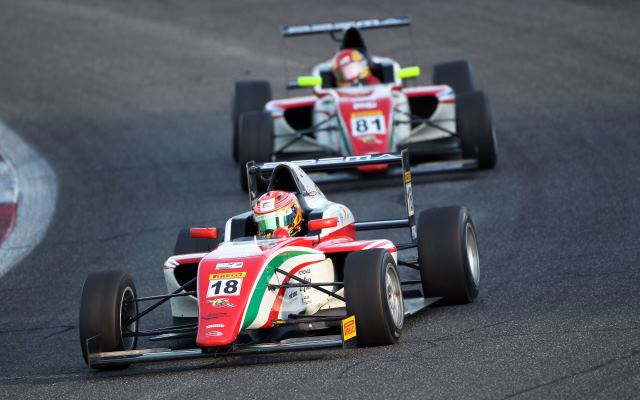 Lance Stroll was secured the inaugural Italian F4 champion after winning a titanic tussle with teammate Brandon Maisano and claiming victory in the third race of the weekend at Vallelunga.

Stroll’s win, coupled with nearest championship rival Andrea Russo finishing only seventh, was enough for the Ferrari protege to clinch the championship.

The 15-year-old Canadian, starting alongside poleman Maisano, shadowed his teammate throughout the first few laps, briefly getting alongside on lap seven, but to no avail.

Maisano, then ran wide on lap 12, promoting Stroll into the lead. It was anything but a relaxing Sunday drive for the Ferrari junior?thereon, but he managed to hold on to take his second victory of the weekend.

Ineligible for the main championship due to his age, ex-FDA driver Maisano has now mathematically wrapped up the Trophy class for those born before 1996.

Euronova’s Leonardo Pulcini made a strong start from fifth and was up to third, but was under constant pressure from Mattia Drudi. The F & M racer made a late dive up the inside of Pulcini on lap 12 for the final podium spot, while Prema’s Takashi Kasai followed through, demoting Pulcini back to fifth.

Pulcini’s teammate Andrea Fontana had a similar race, moving up to sixth at the start, but struggled for pace and slipped back gradually. Antonelli duo of Joao Vieira and Russo finished sixth and seventh, ahead of Jenzer’s Alain Valente. SMP-backed driver Ivan Matveev finished ninth despite colliding with Mahaveer Raghunathan in the closing stages, with Fontana completing the top ten.

Pommer wins yet again in German F3 at Lausitz