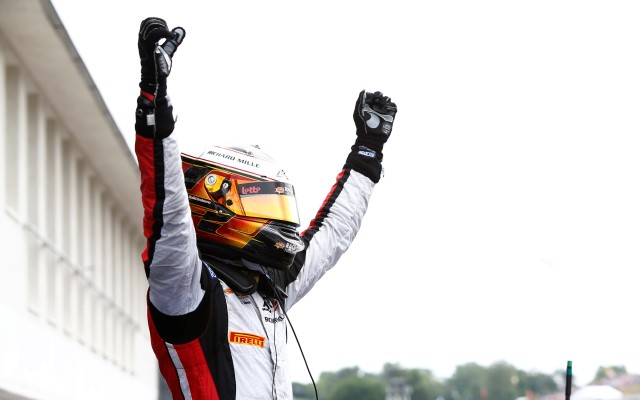 Stoffel Vandoorne claimed his second win in GP2 with an untroubled drive to victory in the sprint race at the Hungaroring.

Starting second on the grid, the McLaren-backed ace made a better start than pole-sitter Nathanael Berthon to move into a lead that he would increase to 3.3 by the end of the race, setting the fastest lap on the 28th and final tour. The result moves the Belgian up from sixth to third in the standings.

Felipe Nasr threatened Vandoorne in the first couple of corners but was soon forced into more rearguard action on his rival Jolyon Palmer. The championship leader didn’t make the best of starts but cleared Daniel Abt and Berthon in the opening laps to move up into third. He quickly caught Nasr and put a move on him at turn one that escalated the tension between the pair to new levels.

Nasr claimed that he was forced off the track on the exit of the corner by Palmer, and stewards even investigated the incident but decided to take no further action. Palmer struggled for pace in the last few laps – complaining about wear on the front-left tyre that he had to use in practice after being hit by Johnny Cecotto – but Nasr ran out of time to challenge him again.

There were words exchanged between Palmer and Nasr in parc ferme and again in the podium interviews. Palmer has added another two points to his championship lead over Nasr, with 43 now between them.

Berthon scored his best result for a year as he beat Abt to fourth by half a second. Feature race winner Arthur Pic has a quiet run to sixth while Conor Daly went from 13th to seventh at the start to grab his first points of the season. He had been under pressure from Adrian Quaife-Hobbs, but the Briton fell back at the end into the clutches of Tom Dillmann. Dillmann made a move for the final point at the chicane on the last lap but spun and failed to finish.

Raffaele Marciello missed a point by one position after coming from 19th on the grid following the penalty that meant he didn’t start on the front row as he originally should have done.

UPDATE: Adrian Quaife-Hobbs received a time penalty for his incident with Dillmann, which relegates the Brit to 12th and promotes Raffaele Marciello into a points-paying position. Similarly, Daniel de Jong picked up twenty seconds post-race for running into Julian Leal and will lose one place in the classification.

Andre Negrao, who retired after making contact with Simon Trummer, will lose five places on the grid of the next race due to having forced the Swiss driver off the track.

Niederhauser returns to the top step in second Hungaroring race