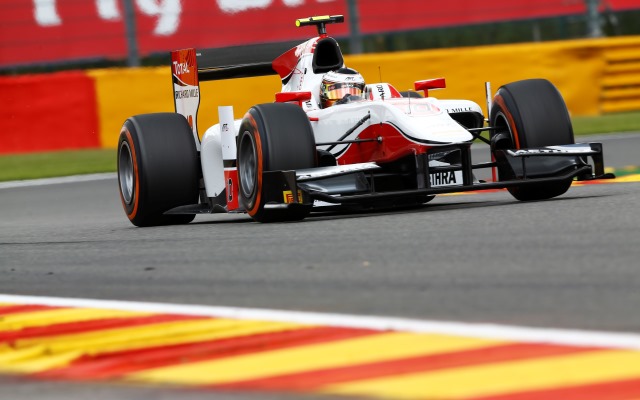 Stoffel Vandoorne scored his first pole position in GP2 at his home circuit of Spa-Francorchamps.

The local star defeated championship leader Jolyon Palmer by 0.018s with an effort late in the session. As has been the case before this season, Palmer’s benchmark was set with his first flying lap and led to him pitting before the chequered flag, unable to better it.

Vandoorne took full advantage of that and claimed pole, having previously qualified second to Palmer in both Bahrain and Hockenheim. Palmer was still able to take a safe second place, putting him on the front row for the seventh time from eight qualifying sessions this season.

Mitch Evans moved up to third at the end of the session, exactly two tenths slower than Palmer. Raffaele Marciello was fourth, while practice pacesetters Johnny Cecotto and Julian Leal ended up completing the top six.

Nathanael Berthon also kept up his strong pace to take seventh ahead of Simon Trummer, Marco Sorensen and Stephane Richelmi.

Palmer’s nearest title rival Felipe Nasr could only manage 11th, and could yet fall further down the grid if he is punished for holding up his Carlin team-mate Leal at the final chicane.