Sorensen completes Spielberg double with another win from pole 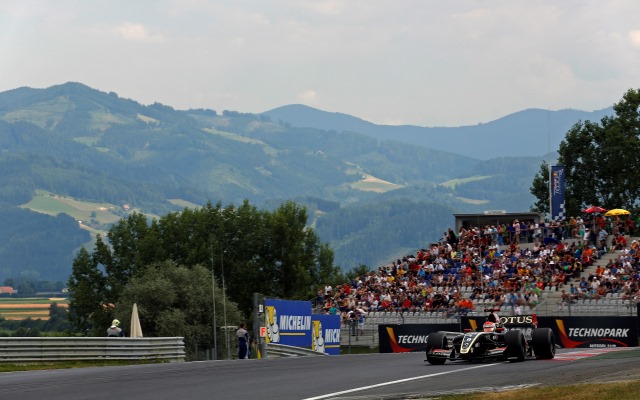 Marco Sorensen completed a near-perfect weekend in Formula Renault 3.5 at Spielberg with his second win from pole position in Sunday’s race.

He led fellow Dane Kevin Magnussen throughout, making their mandatory pitstops together on lap ten and reassuming the lead before a safety car was called because Carlos Huertas had spun and stalled facing the wrong way on the exit of the final corner.

Sorensen failed to get a gap over Magnussen at the restart and had to spend a lap covering the inside line into the corners, but Magnussen then slipped back into the clutches of Nigel Melker, releasing Sorensen. The Lotus junior ace stretched his lead over his compatriot to 4.5 seconds before the finish.

Magnussen had passed Melker for second on the first lap, and the result stretches his championship lead after more trouble for his two closest rivals within metres of the start.

Antonio Felix da Costa failed to get away from eighth on the grid, before Stoffel Vandoorne spun at turn 1 as he went side-by-side with Magnussen. He got going again, but just as on Saturday he would later pit to retire. He’s now 30 points behind Magnussen, while Felix da Costa loses two spots to fifth, 71 points away from Magnussen.

Melker’s third place gave him his fourth podium in sixth races, and saw him move up to fourth in the standings at Felix da Costa’s expense.

Sergey Sirotkin proved a point at the end of a week that saw him tied to Sauber with a drive from tenth to fourth. He led the race before making a late stop, rejoining alongside Norman Nato before taking the Frenchman for fifth a few turns later. He went on to get past Will Stevens as well.

Stevens slipped to sixth behind Will Buller after the safety car period, but that was still enough to move the Caterham academy racer up into third place in the championship standings. As for Buller, he claimed his third top top six result in four races since joining FR3.5 with the rookie Zeta Corse team.

Sorensen’s team-mate Marlon Stockinger completed a positive weekend for the Charouz-run team with seventh place ahead of Nico Muller, Pietro Fantin and Nato.

While those that stopped late made up ground, Arthur Pic paid for a price for stopping early out of fifth place. He was ninth once all the stops had been made, before losing further places and finishing two laps down via a trip to the pits and a 20 second penalty.

Rowland secures first pole of the season at Spielberg