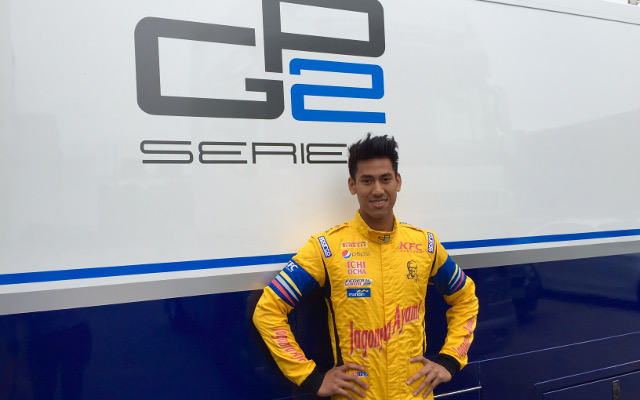 Sean Gelael has extended his racing programme into the GP2 Series for the rest of 2015, taking part in four of the remaining five rounds with Carlin.

The 18-year-old Indonesian will drive the car vacated by Marco Sorensen after the Dane pulled the plug on a point-less season prior to the Silverstone round, when Johnny Cecotto stepped in.

Gelael has been racing in Formula Renault 3.5 this year with Carlin, scoring a single points finish with eighth place in Monaco.

Prior to that he spent two years in European F3, the latter with Carlin, finishing 18th in the 2014 standings.

Gelael will race alongside team regular?Julian Leal at the Hungaroring, Spa-Francorchamps, Sochi and Abu Dhabi but miss Monza due to the clashing Silverstone FR3.5 round.

?The opportunity came up at Carlin and it was a good fit, I just want to try and learn as much as possible and it will be good to get experience of the Pirelli tyres,” said Gelael.

“I?m not quite sure what I?m doing yet next year so using this as a building year.? To be able to do these GP2 races with Carlin who we have great chemistry with and a great history with makes sense.? I?m just really happy to have the opportunity.?

Team boss Trever Carlin commented: “We?re delighted to have Sean in GP2 with us for four rounds this season.? He is still very young and is wisely learning as much as he can this season after stepping up from F3 last year.

“Sean is always a joy to work with and we?ll be working with him very closely to help him get the most out of this experience as possible.”