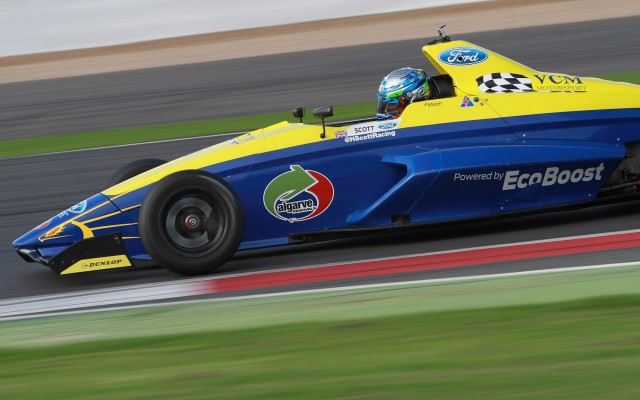 Harrison Scott will return for a second season of Formula Ford GB this season with Falcon Motorsport.

Scott, who finished second in the 2013 standings behind dominant champion Dan Cammish, was one of the first four drivers to be confirmed for the upcoming campaign at the Autosport International show on Thursday.

Scott will be joined at Falcon by Chris Mealin, while Connor Mills will continue with Meridian Motorsport with a new team-mate in Ashley Sutton.

17-year-old Scott enjoyed an impressive first season out of cars last year, claiming 16 overall podiums on his way to the runner-up spot and also claiming the Scholarship title. He was one of only two drivers to beat Cammish to claim a pole position, and notched up a first win at Silverstone once the champion had wrapped up the title and departed the series.

“We had a big sit-down over the winter to examine our options,” said Scott. “I?m still only 17 and I want to learn my trade properly and get some good results, so we decided not to try to move up the ladder too quickly and that another season of Formula Ford was the best option.

“My aim will be to try to go better than last year and to win the championship using everything that I have so far learned. I came on strong in the second half of the year, was challenging Dan, and if I can carry that on and win races then hopefully the championship title will follow.”

20-year-old Mealin, from the Isle of Man, will be a newcomer to single-seater racing. He tasted Formula Ford for the first time at the championship’s Sampler Day in November, and then joined Falcon’s testing programme in Spain.

“Really single-seaters have always been in my heart but I didn?t have a way into it before,” he said. “I love the car and cant wait to get back in it ? the speed when the turbo kicks in is just unbelievable. I have a lot to learn about racing, and I?m very happy to be in a team with a second-year driver like Harrison, from whom I can learn.”

Team boss Nick Streatfield is delighted to have retained Scott to lead a planned four-car assault on the 2014 championship.

?It?s a huge boost for Falcon to have Harrison back with us. He had a lot of options open to him and clearly we are delighted that he has decided to stay with us and with Formula Ford. He is going to be a championship contender and we are concentrating on putting together the very best package for him.

?Chris will be an asset to the team also ? he tested with us in Spain in December and settled into the team very quickly and went extremely well. We are looking forward to working with him. At the moment we are in advanced negotiations with two or three drivers and hope to announce the remaining seats very soon.?

Meridian contested four meetings in the second half of 2013 with karting graduate Mills, and will return in 2014 with a three-car line-up. 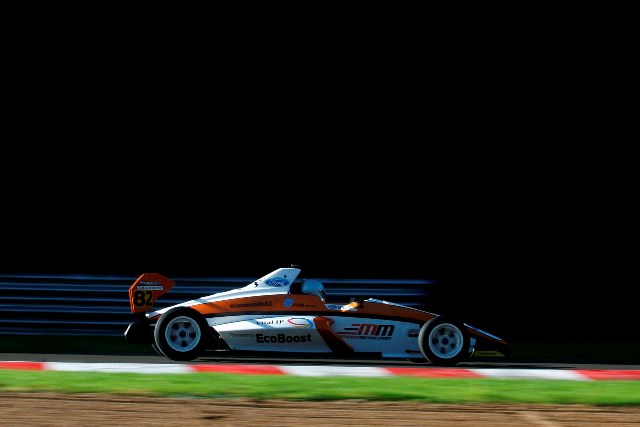 “Last year was like a long test session for me and the team for this coming season,” said 17-year-old Mills, who is part of Arden’s Young Racing Driver Academy. “I think we encountered and solved pretty much every problem that can go wrong with the car, and I learned a lot about the circuits, the aerodynamics and the slick tyres. It?s made me much more confident.”

20-year-old Sutton was a multiple champion in karting and made his single-seater bow in 2010 in Formula Vee, but has since been sidelined following a road car accident.

“The car crash put me out for two seasons, and it has been a long recovery road,” said Sutton. “I?m really looking forward to getting back to racing, and I was very impressed with the car when I tested with Meridian ? I was shocked by how much grip it had and how much power; I really, really enjoyed the car.”

Meridian have acquired the cars that took Cammish to the title and Juan Rosso to a triple win at Brands Hatch, and team chief Paul Abercrombie is confident about his team’s prospects.

“It?s great to have finalised our line-up so soon and it gives us the opportunity to get ahead with preparing the cars ready to hit the ground running as early as possible,” he said.

“I?m hopeful that we will get good results: Connor has half a season of experience under his belt and Ashley has shown great speed in karts and will adapt quickly, I am sure. Our third driver, whose identity we cannot reveal just yet, is an equally exciting prospect.”