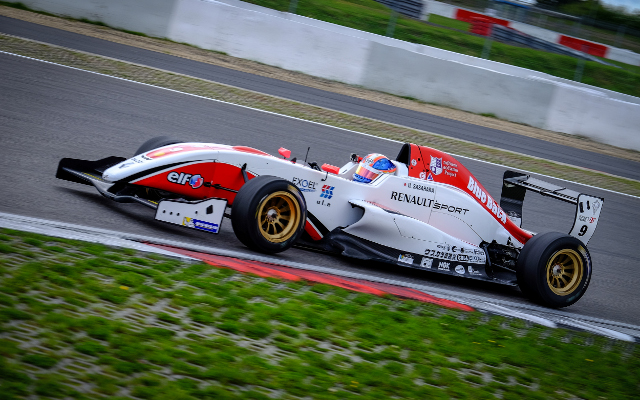 Ukyo Sasahara kept Formula Renault 2.0 NEC leader Louis Deletraz at bay to win the first of the two races at the Nurburgring, his first victory in the series since the season opener at Monza in April.

Starting from pole position, the Japanese driver got a good start to keep the lead. Deletraz’s getaway was not so strong, but he held onto second from Josef Kaufmann Racing team-mate Kevin Jorg.

Deletraz quickly started to hassle Sasahara, and pushed the pair of them away from Jorg and the rest of the pack.

Some moisture at the chicane at the end of the lap prompted a precautionary safety car period midway through the race, putting the scrap at the front on hold.

After the restart, Sasahara couldn’t pull away from Deletraz but he stayed out front, winning by 0.6 seconds.

Third place for Jorg was not enough for him to hold onto second in the standings, falling two points behind Sasahara. Deletraz’s lead increased by two points to 55 with four races remaining.

Force India protege Jehan Daruvala was fourth for much of the race but lost out at the restart to new Fortec team-mate Stefan Riener, who survived a Turn 1 clash with Darius Oskoui that put the Swiss driver into a spin.

Behind that the Daruvala-Riener fight at the restart, there was a scrap for sixth between Dan Ticktum, Nikita Mazepin and Max Defourny.

A poor first lap had dropped Defourny to 10th but he quickly carved his way back up the order and capitalised on Mazepin’s failure to pass Ticktum to steal seventh away.

He then dived down the inside of Ticktum into the first corner on the final lap and claimed the place despite running deep.

Ticktum, Mazepin and Josef Zaruba finished behind Defourny, while 10th was Dries Vanthoor, fighting his way from the back of the grid and making a late move to get past Pontus Fredricsson.

Oskoui recovered from the back of the pack to take 12th.

Colin Noble and Bruno Baptista came together at the chicane on the first lap and were forced to the pits – Noble finishing a lap down in 20th and Baptista failing to get out again.