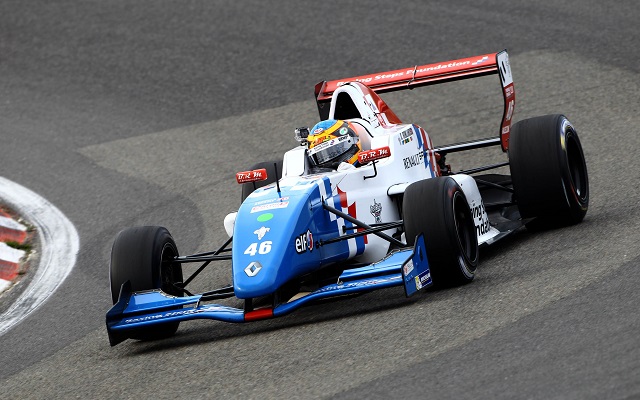 Manor MP’s Oliver Rowland took his second victory of the Zandvoort Formula Renault 2.0 round in race two with an impeccable drive in wet conditions.

The 21-year-old Brit led every single lap from pole and ended up amassing a 14.6s lead over his nearest rival by the checkered flag.

His feat was made more impressive by the two safety car periods that significantly shortened the amount of green flag running in the 25-minute race. While the first safety car oversaw the start of the race, brought out by the stewards due to difficult weather, the second interruption was caused by an incident on lap four, where three top-ten runners – crowned series champion Matt Parry, Andrea Pizzitola and Raoul Owens – ended their races prematurely.

While Rowland was completely untouchable at the front, there was some intense fighting for the other podium positions. Front row starter Alfonso Celis managed to keep Roman Mavlanov at bay for most of the race, but was finally overtaken on the penultimate lap, settling for third behind the Russian driver.

Josef Kaufmann Racing teammates Dennis Olsen and Steijn Schothorst spent the race fighting it out for fourth, and were eventually both denied the position by Jack Aitken, with Olsen remained ahead of the Dutchman.