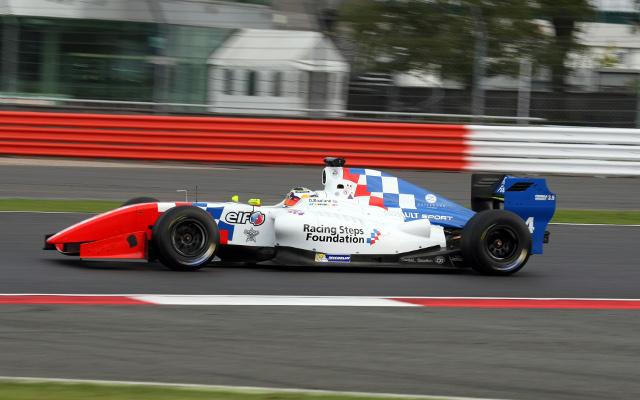 After claiming pole by half a second, Vaxiviere led off the start and quickly built a margin over Rowland behind him, leading by 2.4 seconds at the end of lap three.

He pitted from the lead at the end of lap seven, while Rowland stayed out for another three laps.

Vaxiviere’s stop was slow, meaning even early third-place runner Pietro Fantin emerged from the pits ahead of him, although Vaxiviere was quickly able to move back ahead.

Rowland though could rejoin with a decent gap, although Vaxiviere quickly closed that with his tyres up to temperature.

The safety car then came out to recover the stopped car of Tom Dillmann.

Rowland had a decent restart, but was caught by Vaxiviere at one point as they passed the Wing, forcing Rowland into a defensive line.

Vaxiviere soon ran wide at Copse though, and Rowland was never troubled after that, although he did get a warning flag over track limits.

Vaxiviere finished 1.2 seconds behind, while Fantin picked up his first podium of the season in third.

Dean Stoneman took fourth ahead of Nicholas Latifi, passing the Canadian when he ran wide at Village on lap one while having a look at Fantin.

Rowland’s Fortec team-mate Jazeman Jaafar ran sixth early on before crawling to a halt at Abbey, promoting Egor Orudzhev after the Russian made quick-fire passes on both Nick Yelloly and Aurelien Panis.

Gustav Malja took eighth, as Panis collided with Tio Ellinas at Luffield on the final lap. Panis made it home in ninth with Sean Gelael 10th ahead of Ellinas, who had also been spun around at the first corner of the race after contact from Nyck de Vries.

De Vries was involved in a further clash with Bruno Bonifacio later in the race, putting the Brazilian in the gravel and retiring in the pits with suspension damage.