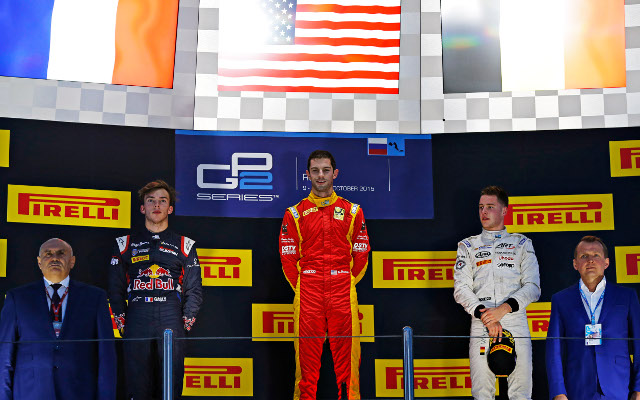 Alexander Rossi scored his second straight GP2 feature race win on his return from Formula 1 duties in Sochi, taking victory after Alex Lynn crashed while leading near the end of a shortened 15-lap distance.

The race length was slashed from 28 laps after a first-lap pile-up triggered a red flag. When the race restarted, there were only 30 minutes until sunset and so the number of laps was reduced to 15.

Poleman Lynn opened up a lead of nearly three seconds on the first lap after the restart, and although he made his still-mandatory pitstop soon afterwards, he was set to return to the lead with a few laps remaining with just Stoffel Vandoorne left to pit.

But he then went off on his own at Turn 13 and glanced the tyre barrier with his front-left tyre, damaging it and preventing him from continuing.

It follows Lynn’s collision while fighting for the lead of the last feature race at Monza.

In his first race back in GP2 after his two Manor F1 appearances in Singapore and Japan, Rossi had emerged from his pitstop just in front of Lynn but was passed by the Briton around the outside of the long Turn 3 left-hander.

He picked up the pieces though when Lynn crashed out and took the chequered flag with a three-second margin over Pierre Gasly, who unlike his rivals went onto the softer of the two tyre compounds at his pitstop.

Vandoorne had started second at the grid but was swamped on the run into Turn 2 for the first time and restarted in fifth.

Having passed Arthur Pic when the Frenchman went off track, he rejoined from his later pitstop just behind Rossi and Gasly.

The McLaren protege had an off of his own before the finish but recovered to set the fastest lap on the very last lap.

That gained him two bonus points, and although he needed to outscore Rossi by six points in the feature race to secure the title, he will now wrap it up on Sunday as long as Rossi does not score four more points.

As a new race distance was declared and completed, full points were awarded.

Sergey Sirotkin recovered from starting down in 10th at his home circuit to finish fourth ahead of Rio Haryanto and Raffaele Marciello while Pic ended up eighth behind Richie Stanaway.

Despite the short race, Dean Stoneman picked up points in ninth on his GP2 debut from 18th on the grid, ahead of Mitch Evans.

The opening lap pile-up came about when some drivers ran deep at Turn 2, including Artem Markelov who clobbered the wall on the left-hand-side as he attempted to rejoin.

He ended then up in the barrier on the right together with Marlon Stockinger and Sergio Canamasas as they attempted to avoid the Russian and his errant rear-left wheel.

Jordan King went straight on into the barriers further around Turn 3 after picking up front-end damage when he ran into the back of Stockinger under braking for Turn 2.

Although all four drivers were quickly out of their cars, lengthy repairs were required to the Tecpro barriers.

UPDATE: Ultimately only half-points were awarded, meaning Vandoorne’s lead over Rossi is 104 points rather than 100, and Vandoorne will be champion on Sunday if he is not outscored by eight or more.