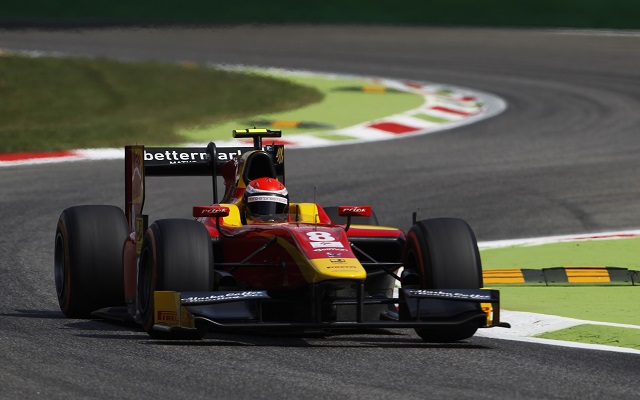 One race?after taking his first victory of the GP2 season, Alexander Rossi doubled up by triumphing in the feature event at Monza.

The Racing Engineering driver made up three places on the opening lap to run in fifth behind the quickly starting Pierre Gasly and the battling trio?of Alex Lynn, Sergey Sirotkin and Stoffel Vandoorne.

Vandoorne, starting from second, was overtaken by Lynn at the first chicane but fought back at the following turn only to lose out again after a tiny mistake on the exit of the first Lesmo turn.

He had to give up third to Sirotkin on the following lap as well before the safety car was required after Meindert van Buuren‘s crash at the Ascari chicane.

Vandoorne was the first?one to pit once back under green and the Mclaren junior profited from that decision massively.

Two laps later, Gasly went in to change tires as well but his race soon met an premature?end due to a wrongly fitted tire.

The lead was inherited by Sirotkin, who managed to pass Lynn in the pits, but it was soon Vandoorne ahead as he managed to overtake the Russian on warmer tires.

Sirotkin fought back to reclaim first the next lap and Lynn attempted to pass Vandoorne next time around as well, only to lose control under braking and hit Sirotkin’s car, causing both of them to retire.

Although all three of Vandoorne’s early opponents had retired, the Mclaren junior soon had to face another challenger in Rossi, who quickly closed the gap on him.

The Racing Engineering driver spent several laps trying to slipstream past Vandoorne before managing to make a successful move on the inside of turn one.

With only a couple of laps left, Rossi took the checkered flag first by just over a second.

Norman Nato was third to cross the line but the Frenchman received a five-second time penalty for speeding in the pitlane, which allowed Mitch Evans to celebrate a brilliant recovery race from 23rd on the grid to the podium having been excluded from a second-place result in qualifying.

Richie Stanaway and Artem Markelov were the best of those starting on hard tyres in fourth and fifth, followed by Nato and Arthur Pic, who dropped from third to seventh during the final couple of laps.

Jordan King secured eighth and the pole position for tomorrow’s race and the top ten was completed by Robert Visoiu and Rene Binder.