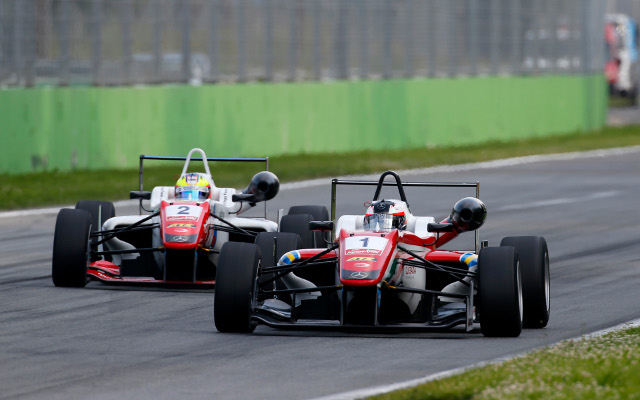 Felix Rosenqvist secured a third win of the weekend in the final FIA F3 European Championship race at Monza, which was red-flagged after just nine laps following a continuation of the on-track incidents that have blighted the event.

At the time, the race was under its second safety car period. The first had come after an incident at the start in which Ryan Tveter rode over the back of Fabian Schiller under braking, and lasted for until the end of lap four while the American was attended to.

There were then two laps of green flag racing before Mikkel Jensen tripped over Lance Stroll in a multi-car fight over seventh place at the first chicane, the Dane ending up in the gravel.

After deploying the safety car, officials opted to stop the race for good.

That left Rosenqvist as the winner after leading from pole position once more, but with less than half of the planned race distance completed, the Swede will have to put up with half-points for the second successive race.

Having never been off the podium this season prior to his home event, Antonio Giovinazzi ended a rostrum-less weekend with fourth place. Brandon Maisano and Gustavo Menezes scrapped over fifth, with the Frenchman coming out on top.

The fight for seventh that culminated in the race-ending contact had begun when Santino Ferrucci attempted to dive down the inside of his Mucke team-mate Mikkel Jensen at Ascari. This caused both cars to slow, allowing Stroll and George Russell to attack them.

Stroll – who only started 11th under appeal after he had been banished to a pitlane start as punishment for his frightening crash in race two – went down the inside of Jensen into the Parabolica and forced both cars wide to the extremities of the new tarmac run-off area.

Russell benefited to take seventh ahead of Ferrucci, with Stroll and Maximilian Gunther completing the top 10.