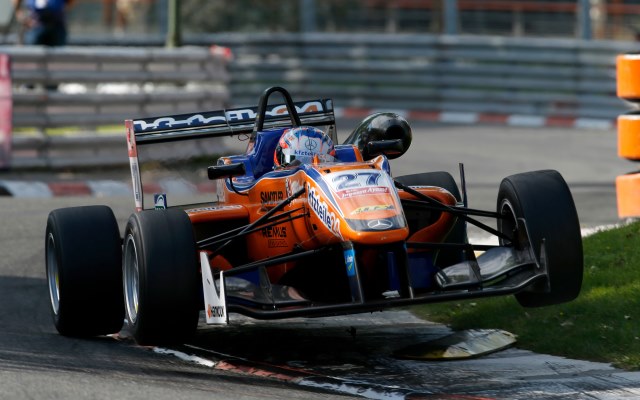 Felix Rosenqvist notched up his first win of the season in the FIA F3 European Championship and victory in the Pau Grand Prix by beating Esteban Ocon off the line in the third and final race of the weekend.

Pole-sitter Ocon got a poor launch off the line, conceding the lead to Rosenqvist and forcing him to move over on Max Verstappen to defend second. Contact between the rookies led to Verstappen slipping down the order before crashing out for the second time today a few laps in.

The gap between Rosenqvist and Ocon see-sawed during the first half of the race before a safety car was called for when Michele Beretta went off into the barriers.

Ocon was right on Rosenqvist’s tail at the restart but the Swede opened up a 0.7 second gap in the first green flag and the margin then hovered between that and one second until the end.

Race two winner Tom Blomqvist had a quiet run to third, meaning that the weekend’s three race winners were all on the podium.

Jake Dennis rounded out a fine weekend with a fourth – his third top four result of the event. Mitch Gilbert was a strong fifth, holding off an aggressive Lucas Auer and the pursuing cars of Dennis van de Laar, John Bryant-Meisner and Jordan King. Antonio Giovinazzi took the final point in tenth.