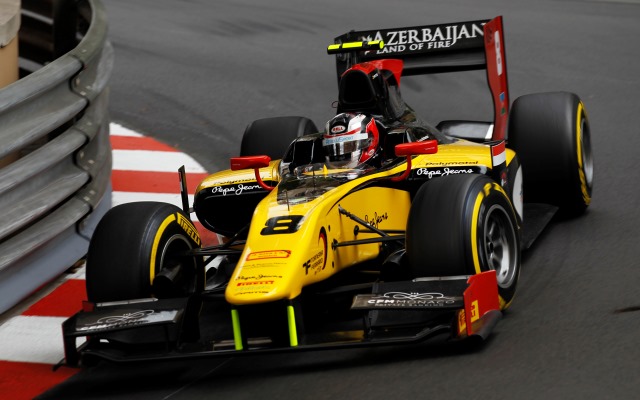 Stephane Richelmi claimed his first GP2 victory on his home streets in Monaco with a lights-to-flag drive in the sprint race.

After starting on pole, the DAMS driver was challenged by Rio Haryanto off the line but Richelmi stood his ground and kept the lead.

After a good start from fourth, Sergio Canamasas moved up into second by taking advantage of Haryanto being forced wide by Richelmi. The Spaniard then kept up with Richelmi until a mid-race safety car to retrieve the car of Artem Markelov, who had hit the barriers at Sainte Devote at the end of an eventful weekend for the Russian rookie, who had earlier taken a drive-through penalty for colliding with Tio Ellinas on lap one.

Canamasas continued to put pressure on Richelmi after the restart, but the Monegasque driver was able to open up a 2.1 second lead on his way to the chequered flag, as he repeated compatriot Stefano Coletti‘s win in the same race 12 months ago.

Canamasas completed by-far his best weekend in GP2 with his maiden podium in second place, in only his second weekend racing with the Trident team while Haryanto secured his second GP2 top-three finish having been unable to match the leaders’ pace throughout. It means DAMS have won both GP2 races this weekend, and the French squad has Norman Nato on pole for the sole Formula Renault 3.5 race of the weekend on Sunday morning.

He didn’t suffer for speed though as much as fourth-placed Johnny Cecotto, who finished 25 seconds off the lead with a queue of 17 cars behind him.

That queue was led by Arthur Pic, who after losing two spots off the start opted to resume the impressively consistent start to his GP2 career and not risk a lunge on Cecotto as he secured his sixth top-ten finish from as many races in the category.

After finishing second on Friday, Mitch Evans finished in sixth ahead of Jolyon Palmer. The feature race winner was unable to continue his record of making the podium in every race this season but still extended his championship lead on a day when nearest rival Felipe Nasr retired on the opening lap with a puncture forcing him off at Mirabeau. Adrian Quaife-Hobbs took the final points position in eighth.

Munro remains unbeaten in FMCS with race one win