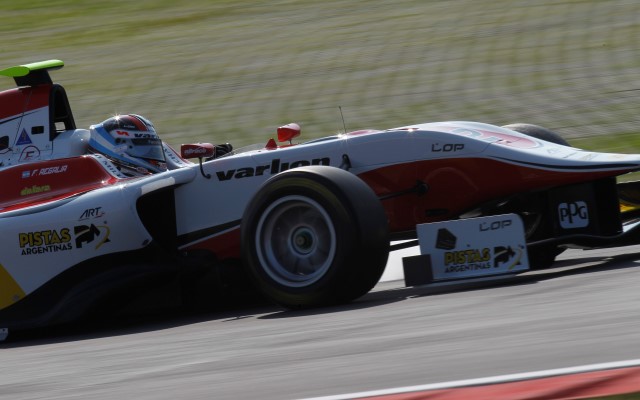 Facu Regalia recorded his first win in the GP3 Series with a dominant victory in the first race at the Nurburgring.

Starting from pole, Regalia managed to pull out a seven second advantage over the opposition over the course of the 15 lap race, despite a safety car intervention after Daniil Kvyat stopped out on track. Regalia became the seventh different winner from seven races this season, but it was another race in which on-track action was limited on the harder choice of tyre compound that Pirelli have used since round two in Valencia.

Regalia’s ART team-mate Jack Harvey was close to Tio Ellinas in the fight for second but unable to find a way past. Ellinas’ first podium finish since the first race of the season extends his championship lead, with Regalia now his nearest rival in the standings.

Lewis Williamson scored his best GP3 result since the first race of the 2011 Nurburgring meeting in fourth, just ahead of fellow Briton Nick Yelloly. Carlos Sainz jumped from tenth to sixth at the start and held the place until the finish, while Williamson’s team-mate Melville McKee made it a good day for the Bamboo team with his first points in seventh.

Kevin Korjus started the day second in the points and ran seventh until he was given a drive-through penalty for contact with Alex Fontana at turn four on the first lap that forced the Swiss driver into retirement after starting third on the grid. The penalty promoted McKee and?Alexander Sims, who will start race two from the reverse grid pole position on his return to GP3. Dino Zamparelli and?Conor Daly recovered from poor qualifying results to complete the top ten.

Eighth win of 2013 for Anthoine Hubert