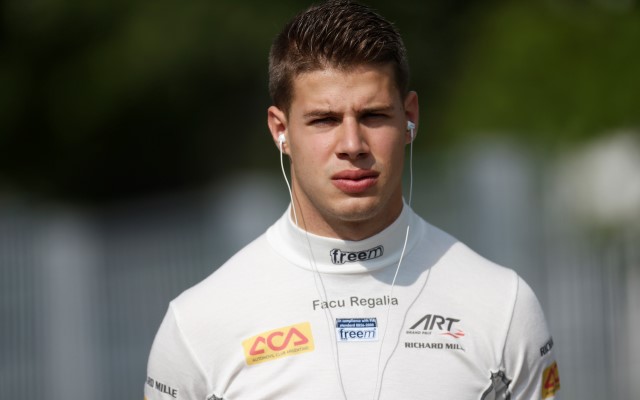 Facu Regalia has secured a GP2 seat for 2014 with the Hilmer Motorsport team as part of a tie-up between the German outfit and the Force India Formula 1 team.

Regalia finished runner-up to Daniil Kvyat in GP3 last year for ART, and had been closing on a cooperation with Force India after his father’s clothing firm Varlion became a sponsor in June.

He partners ART refugee Daniel Abt at Hilmer, who took race wins with three different drivers in their maiden season of GP2 in 2013. The Hilmer cars will run in the colours of Force India.

“It is incredible news for me to be a GP2 driver with Hilmer Motorsport and Sahara Force India?s driver development programme,” said 22-year-old Regalia.

“I appreciate the belief Franz Hilmer showed in my performances last year and the opportunity to race with him in 2014. I am also very proud to be associated with Sahara Force India and will make the most of the opportunities it presents. The chance to drive a Formula One car at the end of the season is also a huge motivation. My focus is to work as hard as I can to make sure we are fighting at the front of the field and getting the best results possible.”

Team boss Hilmer, who owns the Formtech engineering firm, said: “We are very happy about the collaboration between Hilmer Motorsport and Sahara Force India Formula One Team. I?ve had an association with Sahara Force India for ten years and we are looking forward to working together on a sporting level going forward. With Facu Regalia and Daniel Abt we have two very talented young drivers with the potential to progress to Formula One. We will do our best to support them on their way to the pinnacle of motor racing.”

“As a team we?ve always placed great emphasis on nurturing young drivers so I?m delighted to announce our partnership with a GP2 team,” said Mallya. “It?s the logical next step as we look to bring through the next generation of drivers and provide them with the opportunity to showcase their talent. Our presence in GP2 moves us closer to having a holistic development programme to school drivers from grassroots karting to the higher echelons of professional motorsport.”

How the Hilmer GP2 cars will look this season (Photo: Force India)

Abt, whose switch from ART to Hilmer was announced last November, commented: “I am very happy about the association between Hilmer Motorsport and Sahara Force India Formula One Team. Over the last few years, Sahara Force India has given young and talented drivers the opportunity to race in Formula One so it?s great to have their support this season. I am determined to have a successful year with Hilmer Motorsport in the GP2 Series and I?m sure that we have the right package to achieve our ambitious goals.”