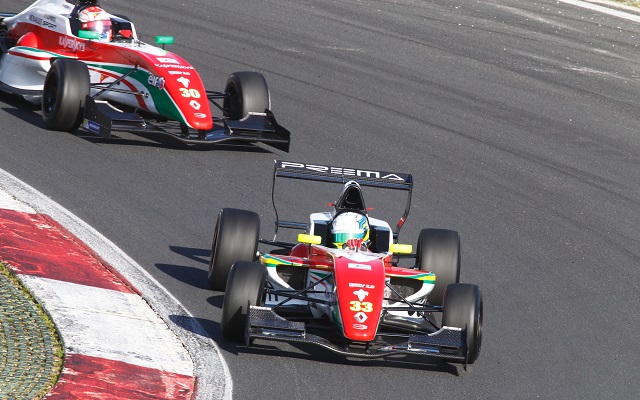 16-year-old Russell makes the switch to cars after a very impressive karting career, throughout which he amassed numerous national titles as well as the victory in the prestigious CIK-FIA European KF3 Championship in 2012.

His debut year with single-seaters will be a busy one, as he combines an Alps campaign with an assault on the BRDC F4 title with Lanan Racing. The calendars of the two respective championships do not clash.

“I’m delighted to have signed with Prema to race in the Formula Renault 2.0 Alps Championship”, stated Russell. “I feel this is the perfect place for me to learn and develop as a driver. The team have already made me feel at home and I’m looking forward to my first test. Hopefully we can pick up where they left off last year by winning the championship.”

Meanwhile, Bosak will contest his third year in the Formula Renault 2.0 Alps category, having run in previous seasons with One Racing and Koiranen. The Polish driver joins Prema on the heels of a campaign in the Ferrari-run Florida Winter Series, where he secured a best finish of fifth.

“I am very happy to race in the Formula Renault 2.0 Alps Championship with Prema”, said Bosak. “I can?t wait to go back on track and improve my experience with the Team. We have already worked together during the winter break and I was immediately impressed by the entire team professionalism.”

The Italian squad dominated the previous season in Formula Renault Alps, winning all 14 races. Apart from sealing the teams’ championship, Prema locked out the first three positions in the drivers’ standings, with Antonio Fuoco leading Luca Ghiotto and Bruno Bonifacio.

“After the incredible 2013 season in which we dominated the Renault Alps series, we?re ready to start with a new project and new drivers”, commented team boss Angelo Rosin. “Bosak is a great guy, he is improving a lot and we can?t wait to see him climb the charts soon. Russell is a young British talent. He proved his talent in kart racing and we?re sure he will repeat with open-wheelers.”

Barnicoat to join Protyre grid for first round of 2014 season