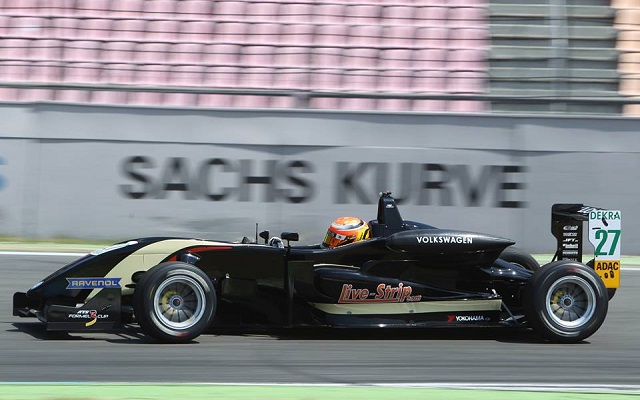 Having collided in yesterday’s reverse-grid race, championship leader Markus Pommer and his rival Nabil Jeffri secured a 1-2 finish for their Motopark squad in the final race of the Hockenheim round.

The duo started from the front row and comfortably maintained their positions into turn one, with Pommer keeping the lead. Behind them, however, the status quo would not be upheld – with Indy Dontje, Santino Ferrucci and Weiron Tan involved in an incident which saw the EuroInternational driver retiring in the pits at the end of lap one.

Dontje and Tan carried on, albeit both lost massive amounts of time, with the former going a lap down in the pits. With Sam MacLeod also getting a terrible opening lap, it was Nicolai Sylvest who rounded out the top three at the end of lap one.

The race has mostly calmed down from that point on, as the leading duo – both surely wary of repeating yesterday’s non-scores – ran superior laps compared to the rest of the field. In fact, Jeffri generally stayed within a second of Pommer and, by the end of it, the necessity to deal with lapped traffic in the form of Tan’s VAR machine and the reported deterioration of Pommer’s car allowed Motopark’s Malaysian to get within half a second of the German race leader.

Still, that would be as close as it got, with Pommer holding on in the closing minutes as Jeffri seemingly settled for second.

Early chaos allowed Sylvest to get a good gap over the other podium contenders and he led MacLeod by more than five seconds. In different conditions, the Scot might have been able to close the gap, but Sylvest was as quick if not quicker throughout much of the race and picked up a very impressive podium finish at he end of it all.

Andres Mendez overtook Nikita Zlobin for fifth during the final lap, while Maximilian Hackl was the final lead-lap finisher in seventh. Tan and Dontje were classified a lap down, with the latter bagging the bonus points for the fastest lap of the race.

Guest driver Thomas Amweg retired from the race with several minutes to go, but still wound up making the 25% mark and was classified five laps down. Meanwhile, Dino Zamparelli, having retired two laps prior, recorded a DNF.