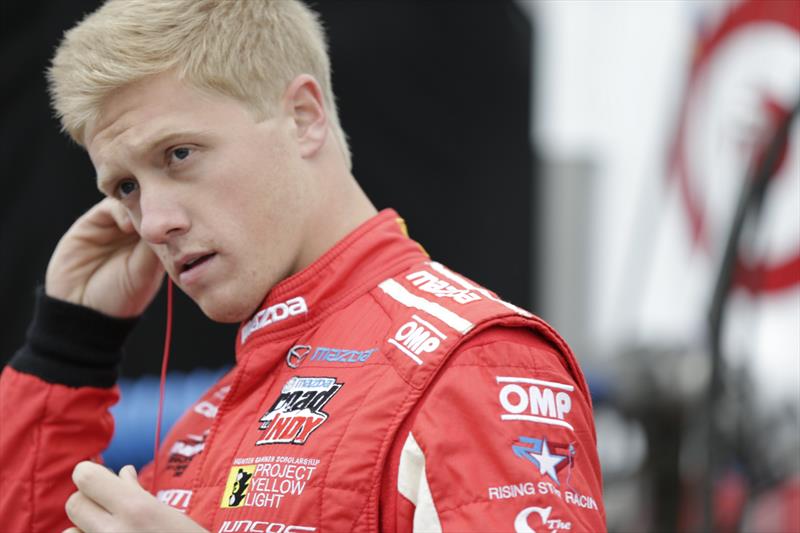 Spencer Pigot completed his second double of the 2015 Indy Lights season, winning the Sunday race on a very wet track in Toronto.

After six cars made it to the finish on the lead lap in yesterday’s dry race, only three completed the distance this time around – all three belonging to the main championship contenders.

Pigot’s top second-best lap in qualifying meant that he held pole for the race, ahead of Ed Jones and RC Enerson, who had a new car built after a massive shunt in yesterday’s opener.

The 11-car field geared up for a double-file start, but the side-by-side action was over before it even begun – Jones lost it on the throttle, spun around and rejoined at the back.

The single-file restart saw Pigot pull out a solid lead in clean air, but the race was soon back under yellows as Scott Anderson went off at T11, damaging his rear wing.

Enerson then lost his car when the race was about to get going again, wrecking his suspension.

The next green flag stint saw Pigot build up a two-second gap over points rival Jack Harvey and Felix Serralles – a gap that was soon gone when Shelby Blackstock spun into the wall at T11.

It was Serralles’ turn to be caught out on the next restart, the Puerto Rican damaging his front wing and coming into the pits alongside Ethan Ringel.

With six cars left on the lead lap, the race was shortened to 30 laps from the original 45.

As the leader checked out again and Harvey came under pressure from star guest Nelson Piquet, Kyle Kaiser forced his way past Juan Piedrahita for fourth and began quickly closing on the fight for second.

Jones also caught Piedrahita and tapped him into the tyre barriers, with both managing to rejoin the race.

And, up ahead, Kaiser caught up with Piquet, only to miss his braking point and hit the Brazilian’s car in the back. The Juncos racer came to a halt in the runoff, while Piquet retired in the pits.

The safety car, however, did not appear and only three cars were left on the lead lap – Pigot, Harvey and Jones, who was a minute down.

Pigot continued to control the race from that point on, taking the checkered flag by three seconds over Harvey, with Jones bringing the car home for a podium finish.

Piedrahita ended up two laps down, which meant he took fourth – his best finish in the series.

Enerson, Blackstock and Serralles all rejoined the race to finish fifth, sixth and seventh, multiple laps down.