Pigot doubles up at Barber to take Lights points lead 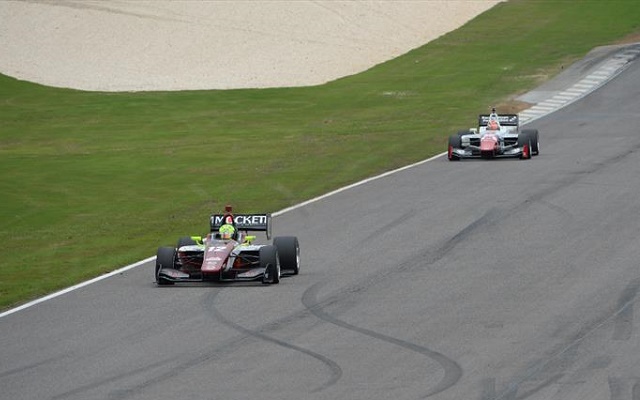 Juncos Racing’s Spencer Pigot has followed up his maiden victory in Indy Lights with another win in the second race at Barber Motorsports Park.

It was another lights-to-flag affair for the California native who will now head into Indianapolis seven points clear of Ed Jones.

Jones, starting third, was tagged by Pigot’s teammate Kyle Kaiser on the opening lap and had to pit in with a suspected flat tyre.

Pigot, meanwhile, was off to a great start and built up a lead of almost five seconds over the opening eight laps.

It is then that he got boxed in behind Jones, who emerged in last after his stop and was not keen on getting lapped.

Unluckily for Pigot, Jones could match his pace, leaving race control with no reason to wave the blue flags.

And, when the duo got bunched up after navigating past the struggling car of Kaiser, Pigot began to lose time behind the Emirati.

He tried an opportunistic move to put the Carlin driver a lap down and the duo made contact, but neither picked up damage.

Pigot, still behind Jones and now just three seconds clear of Harvey, was done trying to overtake and settled for maintaining the lead.

It was the correct decision as he managed to restore his advantage over the Brit once again and coasted to his second win and his fifth podium in five Lights starts.

Harvey took second for the fourth time in 2015, while ex-F1 driver Max Chilton held off Felix Serralles to claim his first podium in Lights.

Scott Anderson recorded his best finish of the season in fifth, while Sean Rayhall ended his debut Lights weekend with a solid sixth place, having passed RC Enerson.

Juan Piedrahita, Ethan Ringel and Shelby Blackstock rounded out the top ten, while Jones took 11th and the fastest lap.

After dramatically slowing on lap 11 due to mechanical issues, Kaiser called it a day.