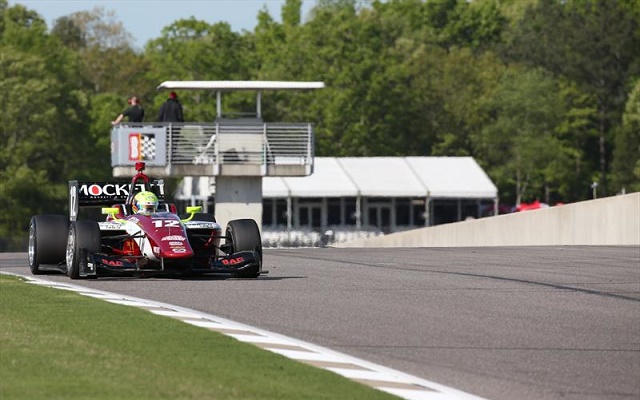 Rookie Spencer Pigot?won the first race?of the Legacy Indy Lights 100 at Barber Motorsports Park, breaking a three-race winning streak by Carlin team rookie?Ed Jones?- and closing in on the championship lead in the process.

The Pasadena, California native?took pole position with a record time on Friday, and led the field to green ahead of?Jack Harvey in the Schmidt Peterson Motorsports?number 42 car.

The first lap proved fateful for two?drivers in the mid-field, as SPM’s?Scott Anderson collided with?Sean Rayhall, the latter making his series debut for 8Star Motorsports. Both drivers spun off and sustained damage that would put them three laps down and out of contention, and their incident brought out a brief full-course yellow.

RC Enerson?gained two places in the fracas to move into third, while Pigot’s teammate?Kyle Kaiser lost four places after qualifying on the second row.

When the race resumed, Pigot checked out from the field, leaving Harvey and the rest of the field well behind. There were very few overtaking opportunities for those behind him for most of the race, but in the closing laps,?Enerson then came under pressure from the championship leader Jones and his Carlin teammate?Max Chilton.

But the USF2000 graduate held his nerve against his more experienced adversaries and came away with the first Indy Lights podium of his career. Jones placed fourth, ending his winning streak, but maintaining his championship advantage over Pigot and once again beating his ex-F1 teammate.

Ahead of them, Pigot drove a flawless 30 laps, leading wire-to-wire en route to the win – by a margin of 6.7 seconds over the defending series runner-up?Harvey.?The win is Pigot’s first at the Lights level, as well as the first in the series for his team, Juncos Racing.