Parry storms away to race one victory 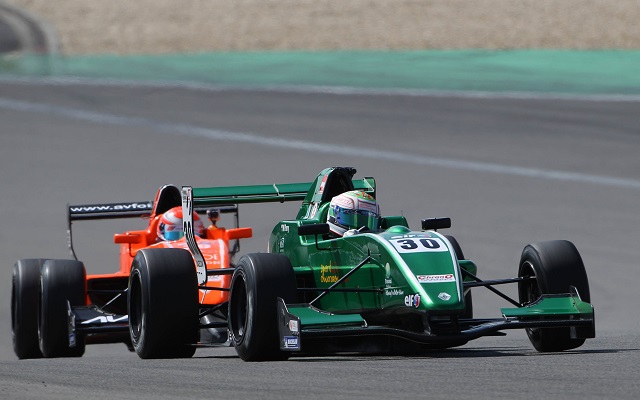 After failing to convert either of his season opener poles to victory at Hockenheim, Matt Parry took his maiden NEC win at Nurburgring, having started in third and taking advantage of lap one mayhem.

It was Oscar Tunjo and Gustav Malja who started ahead of Parry, but lap one wasn’t too kind to them, as Tunjo fell down to third while Malja was involved in a tussle with Jake Dennis, Nicolas Jamin and Roman Mavlanov that ruined the races of the four aforementioned top-ten starters.

Having taken the lead, Parry had an absolutely faultless race, holding Esteban Ocon at bay for thirteen laps. Ocon himself faced a challenge from fellow Lotus junior Tunjo, but managed to hold on to second.

A calm, quiet race from Aurelien Panis saw him take fourth ahead of Mikko Pakari and Victor Sendin, while Dennis Olsen had his best result yet in seventh. Jack Aitken fought from 20th on the grid to eighth, passing Shahaan Engineer on the penultimate lap, while Kuba Dalewski rounded out the top ten. Ryan Tveter and Andrea Pizzitola were both fighting for top ten positions, but a lap seven incident prematurely ended their races.

Caterham junior Parry will have an excellent chance to add to his win tally this afternoon, starting from pole in the second Nurburgring race. His victory in race one ensures that he now leads the championship, with non-regular Ocon three points behind.

Second win for Parry at Nurburgring