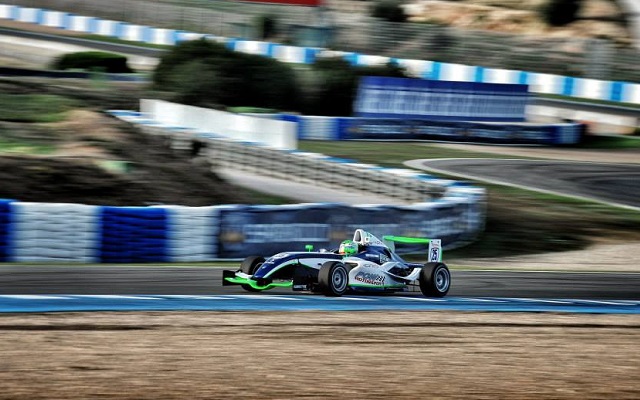 Although it was Max Defourny who started from pole, O’Ward took the lead on lap two and kept himself just ahead of the pack to maintain his position safe throughout the race.

Lasse Sorensen, following his victory in the morning race, started from tenth, and, as the race went on, the Dane picked up the pace and started to pass drivers one by one. He eventually ended up in second, having run out to time catch O’Ward at the end.

Defourny completed the podium, but since he is ineligible to score points, it was Vladimir Atoev in fourth who collected the fifteen points.

Fellow Russian Denis Bulatov finished fifth, followed by Paul Hokfelt?Jr and Valentin Moineault, who will start from pole tomorrow in the season finale.

The top ten was completed by Amaury Richard, Simo Laaksonen and Valentin Hasse-Clot.

The fight for the second place in the standings did not see any changes today. Felix Hirsiger was forced to abandon his race with a broken suspension on lap one, while his rival Dorian Boccolacci had to retire in the pits later on after losing pace and dropping out of the top ten.

Moineault holds on to take first win in final race