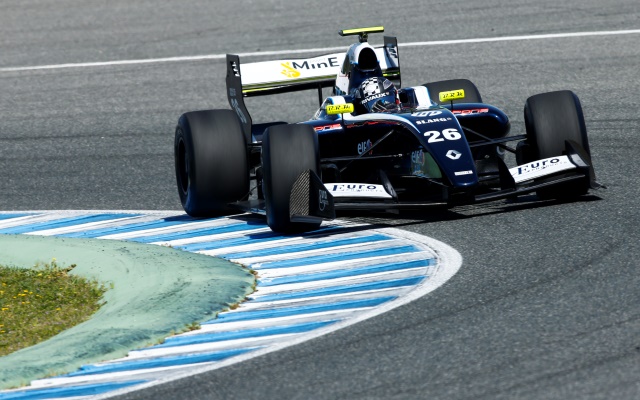 Oscar Tunjo will race in Formula Renault 3.5 for the Pons team from the Spa round onwards.

The Colombian had been set to graduate to the FIA F3 European Championship this year after three seasons in Eurocup Formula Renault 2.0, but left the Signature-Renault project during pre-season testing due to a lack of competitiveness from the new Oreca-built engine.

He will now move over to FR3.5 and take over the second Pons car from Oli Webb, who has raced it at Monza and Motorland Aragon and will continue for the Monaco Grand Prix support race before concentrating fully on his LMP2 programme with Signatech-Alpine.

Tunjo will make his debut with the team at the Spa round the following weekend, and his deal with Pons includes the rest of the 2014 season as well as 2015. The 18-year-old previously tested FR3.5 equipment with the Lotus team at the end of last year.

Tunjo has up to now been part of the Lotus F1 Team junior setup, but he “will perform this process without” their backing. He will be supported by the Colombian arms of Total and Renault.

?We are extremely happy to have reached an agreement with Oscar Tunjo, one of the best young drivers emerged from the F.Renault 2.0 arena,” said team manager Emilio De Villota.

“I?ve been chasing him for quite some time and I?m very satisfied to finally have him in our line-up. We?ll be using the rest of the 2014 season in order to prepare for 2015, a year that we hope will see us among the frontrunners.

“Oliver Webb will return at Monte Carlo alongside Meindert Van Buuren, after lining-up in the opening rounds at Monza and Motorland Aragon. We want to thank him for the commitment and professionalism he showed so far this season.?