Oliver Rowland confirmed for second season in FR3.5 with Fortec 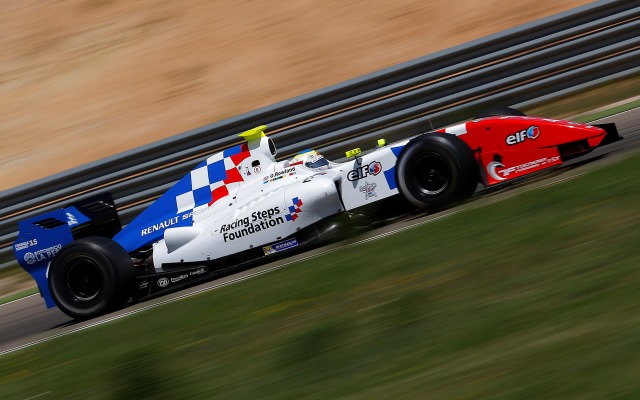 Oliver Rowland will contest a second season in Formula Renault 3.5 with the Fortec team next year, his backers have confirmed.

The announcement was made by Racing Steps Foundation co-ordinator Derek Walters live on television on the BT Sport channel in the United Kingdom on Sunday afternoon, where Rowland was also a guest.

Rowland finished fourth in the FR3.5 standings in 2013, claiming race wins in Aragon and Jerez as he made the step up from Formula Renault 2.0.

The 22-year-old took part in the final day of official post-season testing in Aragon for Fortec and went quickest in the afternoon session.

Rowland graduated from karting to single-seaters in 2011, finishing second in FR2.0 UK and winning the McLaren Autosport BRDC Award. He then finished third and second in two campaigns in Eurocup FR2.0.

Potential team-mates for Rowland for 2015 that Fortec tested at the end of the season included Jazeman Jaafar, Egor Orudzhev and Luca Ghiotto, although all three did also test for other outfits.

‘No change’ was the most obvious choice for Rowland and the RSF for 2015. He’s right to say that he could that have finished runner-up this season – he was only 11 points adrift of Pierre Gasly and his pace, shown by his two wins and three poles, was strong enough. But luck wasn’t always on his side. In particular, there were a couple of first-corner incidents at the Nurburgring and Paul Ricard that cost him big points and were probably not his fault.

That’s not to say he had a faultless season. His rookie rival Gasly enjoyed a far more consistent campaign and got into trouble less often, despite being four years younger. Rowland’s highs were higher, showing what he could achieve with more consistency.

Rowland’s second place and a win at the final round at Jerez shows that he would be tough to beat next season if he maintains that form. In his second year in the series, and at a relatively mature age in an increasingly youthful scene, he will need to put in a Kevin Magnussen-style convincing title campaign. Relying on the backing of the RSF and without any ties to F1 teams at present, only that sort of performance will really make him stand out.

Staying in FR3.5 offers him the chance to make those headlines his career needs, whereas a switch to GP2 would have posed a needlessly tougher challenge. And sticking with Fortec was the obvious thing to do – only DAMS could claim to offer a stronger package, but moving to less familiar surroundings would have given him another unnecessary hurdle to overcome in order to achieve his target.