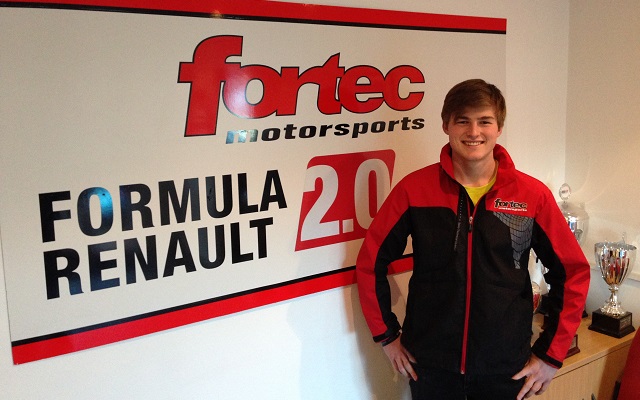 South African driver Callan O’Keeffe will continue racing in Formula Renault 2.0 in 2015, signing with Fortec for the Eurocup and NEC.

O’Keeffe, 18, was a top karting driver, winning the British Super 1 series in KF3 and finishing in the top three in the CIK-FIA World Cup twice.

He made his single-seater debut in the Formula BMW Talent Cup in 2012, winning four races during the regular season but only finishing ninth in the Grand Final.

He was picked up by Red Bull in 2013 and placed in the ADAC Formel Masters championship with Motopark. But a difficult rookie campaign saw him only 13th and he was subsequently dropped by the Austrian F1 team.

After leaving Red Bull, he became a part of the Lotus Junior Team. O’Keeffe did a dual campaign in 2014 – finishing 16th in the Eurocup and seventh in NEC with a maiden win from pole at Assen.

However, as the South African recently admitted, his partnership with Lotus is now also history.

“It was a difficult winter filled with uncertainty,?but thanks to the help of a group of people in South Africa?I’m back on?the grid and thrilled to be joining a team as highly regarded as Fortec” said O’Keeffe.

“More exciting news about my support team will be announced soon, including support from Francois Pienaar, Captain of the victorious South African Rugby World Cup Team in 1995, who is?now involved in sports management!

“I think we have put together a team and driver package?which will,?I have no doubt,?see us being competitive from the first round, giving myself the best chance?of fighting at the front and making 2015 a season to remember!”

NEC champion Ben Barnicoat and other FR2.0 regulars Martin Kodric and Luke Chudleigh will be O’Keeffe’s teammates at Fortec.

His appointment means there’s no room in the team for reported targets Seb Morris and Joseph Mawson, who will now have to pursue other opportunities.

“I’m really happy to have Callan in the team” added Martin Young, Team Manager at Fortec.

“I’ve known Callan for many years now and he has always been a driver that can win races and Championships when it matters. With Callan racing with Fortec in the Eurocup and NEC team he will only further?strengthen the team; I am looking forward to the season ahead!”

Merhi stays in FR3.5 for a sophomore campaign with Pons