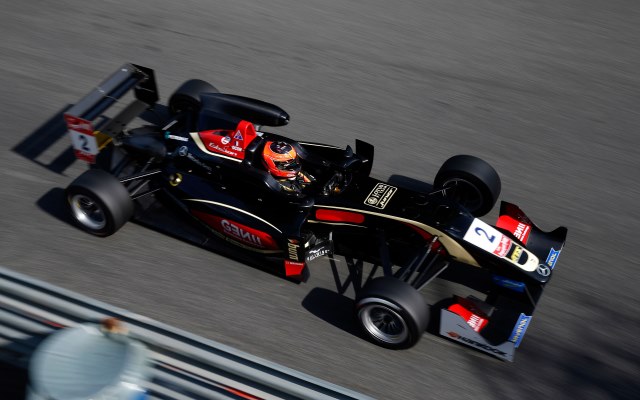 Esteban Ocon continued to impress and extend his points lead in the FIA F3 European Championship with victory in the first race of the weekend on the streets of Pau.

The Frenchman kept the lead away from pole position and, after an early safety car, was able to build up an advantage of 2.5 seconds over the scrapping Lucas Auer and Max Verstappen behind him.

The safety car then made a second appearance. Ocon’s restart was not at strong on this occasion and so he briefly had Auer on his tail, but he was able to open up a lead of nearly three seconds before the finish. He received his winning trophy from FIA president Jean Todt.

Ocon’s third win from three race weekends in the championship extends his lead in the standings up to 47 points, with Auer now second and Verstappen a further 13 behind in third place.

Verstappen bravely went wheel-to-wheel with Auer early in the race and was on his tail shortly after the second restart, but eventually settled for third as he slipped three seconds behind the Austrian.

Jake Dennis was unable to keep pace with the leading three and had to spend the race defending fourth place from his Carlin team-mate Jordan King. King went side-by-side with his fellow Briton at the second restart and then again when Dennis made an error at Gare corner, but Dennis was able to hold on and record his best result in F3.

Felix Serralles claimed his and West-Tec’s best result of the season in sixth ahead of two more Carlin cars of Antonio Giovinazzi and Ed Jones, while Spike Goddard got past Sean Gelael late in the race for ninth.

The first safety car was caused when Alexander Toril went over the back of Mitch Gilbert entering Pont Oscar on the first lap, causing him to go upside down and land on his wheels again. The second was prompted by the demise of Michele Beretta.

Dennis van de Laar pulled the overtaking move of the race to take 13th away from Gustavo Menezes at Pont Oscar. That was followed immediately by Felipe Guimaraes attacking Antonio Fuoco at the hairpin for 16th, forcing both of them wide and allowing Felix Rosenqvist to capitalise. Rosenqvist went on to pass Menezes to finish 14th.

Fuoco, who was on the back foot after crashing early in practice on Friday, scoring no points in 17th means he drops from second to fourth in the points. He is still tied on points with Tom Blomqvist, who narrowly missed the points in 11th after starting 16th due to the third and final instalment of his penalty for an engine change at Hockenheim last week.

Nicholas Latifi had been due to start the race from fourth on the grid but pulled into the pits before even starting the race.