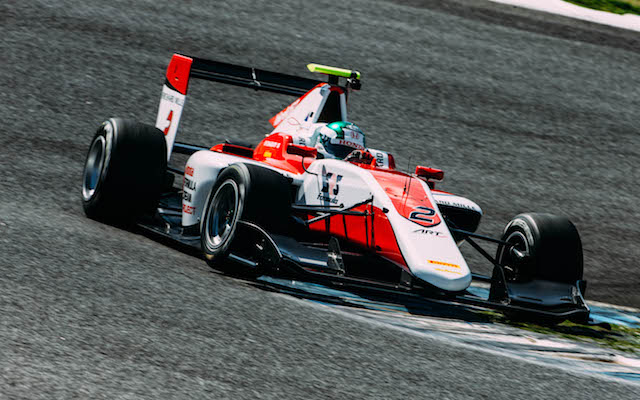 Honda protege?Nirei Fukuzumi?set the pace for ART Grand Prix on the first full test day with the new-for-2016 GP3 car at Estoril.

Following the shakedown at Magny-Cours earlier this month where each team had the use of one car, this was the first proper test with the GP3/16.

Campos Racing recruit Steijn Schothorst led the way in the morning session with a 1m29.792s as the only driver below the 1m30s mark.

The best afternoon times were over a second faster than that, with Japanese Formula 3 convert Fukuzumi posting a 1m28.645s as one of four drivers covered by less than a tenth of a second.

As in the morning, Arden’s?Jake Dennis was second fastest, 0.016s behind Fukuzumi. Two more ART drivers,?Alex Albon and?Charles Leclerc, were six and nine hundredths of a second off respectively.

Campos’?Alex Palou and DAMS driver?Kevin Jorg were next up?while 10th went to?Oscar Tunjo, who was back in a GP3 car for the first time since his race-winning 2015 campaign?ended last July through a lack of funds.

The Colombian was in action for Jenzer Motorsport alongside the team’s sole signed racer?Akash Nandy.

Ralph?Boschung, who drove?for Jenzer last year and at the recent shakedown, was testing a fourth Koiranen car. The only other teams to take advantage of the new rule permitting fourth cars were ART and Trident, who already have complete quartets confirmed?for the season ahead.

Lotus team to run Binder and Nissany in Formula V8 3.5