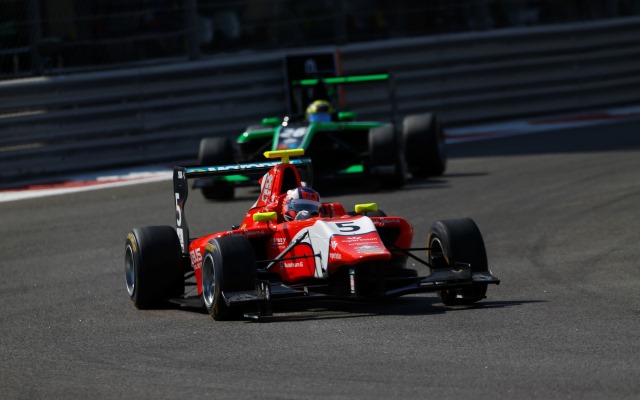 Patric Niederhauser claimed his third reverse grid win of the 2014 GP3 season in the final race of the year in Abu Dhabi, securing the victory with a fast start.

From second on the grid, the Swiss driver out-dragged pole-man Nick Yelloly on the run to turn one. After the safety car made an appearance at the end of lap two, he then pulled away to a 4.9-second victory.

Lynn’s team-mate Emil Bernstorff finished close behind in fourth, as the Carlin team secured the teams’ title – the first squad other than ART to ever win the crown.

Dino Zamparelli was fifth ahead of Kevin Ceccon,?Jimmy Eriksson and Richie Stanaway, who scored his first point for five races. Robert Visoiu and Pal Varhaug completed the top ten.

Race one winner Dean Stoneman was forced out on lap one after contact with Alex Fontana at turn five broke his rear wing.

He had come into the race with a two-point advantage over Marvin Kirchhofer in the fight for the championship runner-up position, and maintained that thanks to the German stalling at the start of the formation lap. Forced to start from the pits, Kirchhofer provided the majority of the action in the race as he drove his way through to finish 12th.

The safety car was needed after Luis Sa Silva punted Ryan Cullen into a spin.