Niederhauser returns to the top step in second Hungaroring race 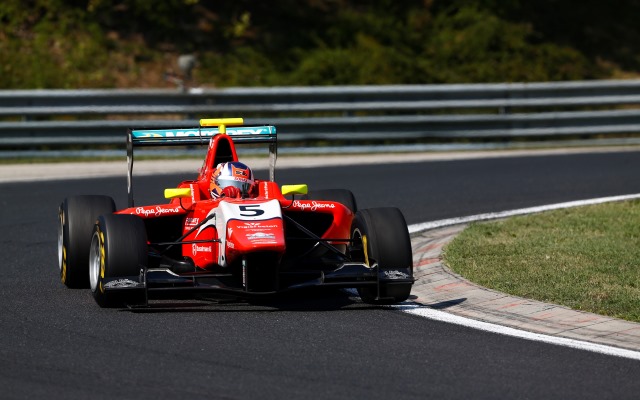 Patric Niederhauser claimed his first win in GP3 for over two years as a fast start propelled him to victory in the second race at the Hungaroring.

Starting third on the reverse grid, the Swiss driver’s great launch moved him past front row starters Dino Zamparelli and Jann Mardenborough before turn one. He then rebuffed an attempted fight back from Zamparelli at turn two, and began to open up a lead, which stood at 1.5 seconds at the end of the 17 lap race.

Zamparelli scored his third podium of the season so far in second but was visibly disappointed to have not turned his pole into a win. Mardenborough followed his Hockenheim race two win with another podium in third after resisting pressure from championship leader Alex Lynn. Robert Visoiu looked for a way past Lynn earlier in the race before dropping back.

While the top five remained static after the first lap, Richie Stanaway put a move on Dean Stoneman at turn one on lap three to claim what would be a distant sixth place. Stoneman also succumbed to Emil Bernstorff on the last lap, but kept Marvin Kirchhofer and Patrick Kujala at bay to take the final point on offer.