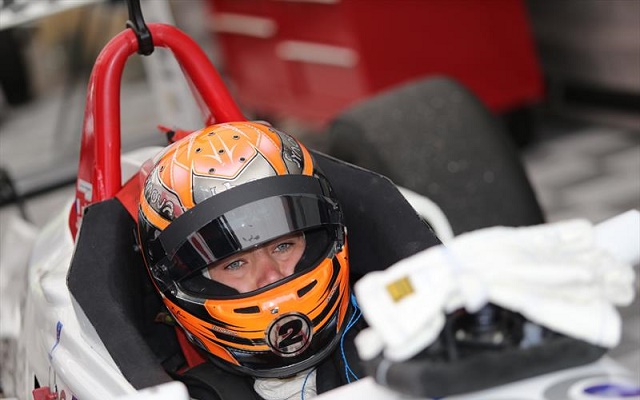 Cape Motorsports driver Nico Jamin rebounded from a tough race one to dominate the USF2000 field in the second race at Barber Motorsports Park.

The Frenchman displayed a mastery of the wet conditions, easing to victory despite two full-course cautions.

The start was delayed by over a half-hour due to heavy rain and lightning. As such, as the green flags waved, the field lined up single-file to kick off the 30-minute race.

Martin was not done, subsequently making a move on Franzoni and even briefly snatching third, only to yield to the Brazilian a few corners later.

But the Australian was back with another try on lap six and overtook Franzoni for good to set up his maiden podium in the category.

By that point, both Jamin and Eidson were off in the distance, the former holding a five-second lead over the latter. But lap nine took the Frenchman to square one as an off for Augie Lerch brought out the caution.

After the restart, the Frenchman was in the clear once more but, just as he was cruising to the checkered flag with three minutes to go, seventh-placed Garth Rickards made a trip to the gravel to bring out another caution.

He then managed to get his car unstuck, making the yellow-flag period an extremely short one and allowing for a one-lap dash to the finish.

While Jamin would not be troubled out front, Martin used the final lap to sneak past Eidson and claimed second, becoming just the fifth driver to take a podium finish in six USF2000 races in 2015.

Eidson retained the championship lead by taking third for the fourth race in a row.

UPDATE: Franzoni has been disqualified following the post-race inspection.