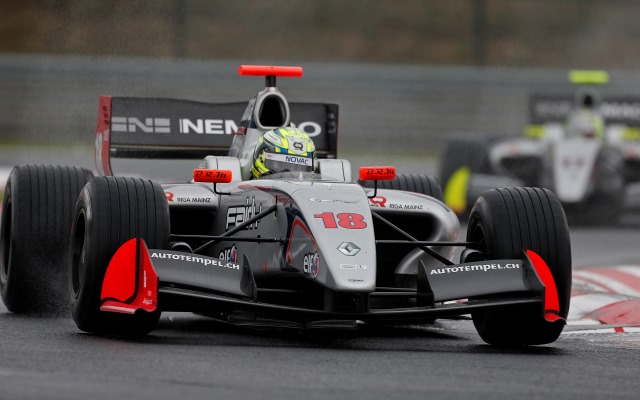 Nico Muller won the first Formula Renault 3.5 race of the Hungaroring weekend by a dominant margin in wet conditions.

The first five laps were run behind the safety car with pole-sitter Andre Negrao leading ahead of Draco team-mate Muller. Muller got a good launch at the green flag and pulled alongside Negrao into the first corner, but the Brazilian was able to keep the lead around the outside.

Muller was eventually able to take the lead when Negrao ran deep at the same corner and was able to stretch his lead to 30 seconds at one stage before finishing up with an advantage of 26 seconds.

Although the Draco pair had put a distance between themselves and the opposition early on, Negrao slipped back to those behind him once he lost the lead.

Expected F1 graduate Sergey Sirotkin had got up into third on the first racing lap from sixth on the grid, but was unable to keep pace with the Draco duo early on. He managed to reel Negrao in but both he and Negrao were then passed in quick succession by championship leader Kevin Magnussen, who had worked his way up from 16th on the grid to secure second place and extend his points advantage.

Negrao continued to make errors and Sirotkin took advantage to finish third and score his second podium of the season. Stoffel Vandoorne followed him through past Negrao to take fourth, making up good ground from 11th on the grid but losing further points to Magnussen in the title race.

Negrao spun out of fifth place at the end of the penultimate lap, allowing Mihail Aleshin to finish fifth. It was a strong recovery from the Russian veteran, who started third but was spun around after contact with Antonio Felix da Costa at turn five on the first green flag lap, an incident that damaged the Red Bull driver’s car enough to force him into retirement. Aleshin then made further contact with William Buller at the same place a lap later.

Tech 1 team-mate Nigel Melker came home sixth ahead of Carlos Sainz, who set the fastest lap on his return to FR3.5 as he came through from the back after stalling at the start. Will Stevens slipped from fourth early on to finish eighth, with Arthur Pic and Matias Laine completing the points.