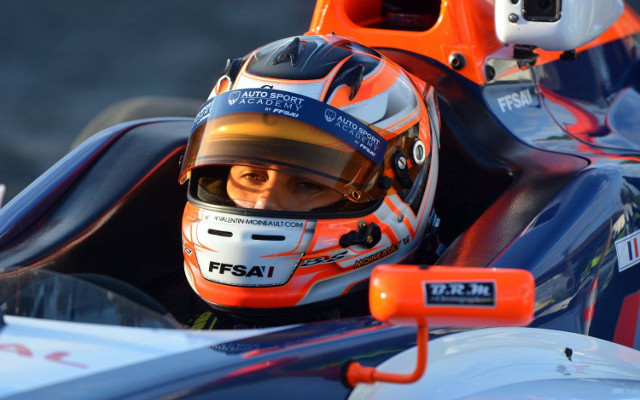 French F4 points leader Valentin Moineault took another step towards sealing the championship after winning the final race of the penultimate round at Navarro.

His sixth win of the season, achieved by leading every lap of the race, sets up a likely unassailable 59-point lead over Sacha Fenestraz heading into the finale.

Moineault was, however, challenged at the start by Giuliano Alesi, who had appeared to get a marginally better launch, but the race leader held on.

And while Alesi kept up with Moineault early on, he soon started to struggle for pace and was passed by Julien Andlauer.

He then slipped further back into the grasp of Kami Laliberte but, as the Canadian lunged down the inside at Turn 9, he ran wide, squeezing Alesi, with Gabriel Aubry getting past both of them.

Aubry then proceded to challenge Andlauer for second, but the latter held on, finishing 6.7s behind Moineault.

Laliberte and Alesi made up the top five, while Nerses Isaakyan passed Julien Darras for sixth.

The top ten was completed by Fenestraz, Simo Laaksonen and Reuben Kressner.

A total of 80 points will be up for grabs in the final round at Paul Ricard, with Moineault heading Fenestraz by 59 and Aubry a further 16 behind.