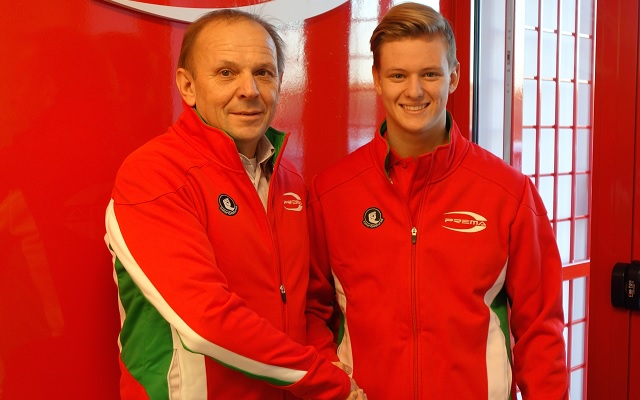 Mick Schumacher has joined Prema for his second season in single-seater racing and another year in Formula 4.

The son of Formula 1 legend Michael Schumacher switches to Prema from Van Amersfoort Racing, with which he finished 10th in ADAC F4 in 2015.

He won the reverse-grid race on his debut weekend at Oschersleben, and it was at a second visit to the same circuit in September that he picked up a second podium.

Prema said it’s not yet decided whether Schumacher will compete in the German or Italian championships. When it announced its other two drivers, Juri Vips and Juan Correa, it said they would be focussing on Germany.

Prema has won two Italian F4 titles out of two in 2014-15 with now-Formula 3 team-mates Lance Stroll and Ralf Aron, who joined Schumacher as a race-winner in the ADAC series last year after four guest appearances.

Team founder Angelo Rosin, who looks after the F4 squad, said: ?I am proud to welcome?Mick?Schumacher to our team. As a driver, he is showcasing a constantly-improving potential and he already has a one-year experience in Formula 4.

“In his maiden season in single seaters, he quickly showed he has all what it takes to aim for the top.

“We always kept an eye on him because he was a perfect prospect for Prema. He is quick, smart, determined and likes to work hard with the team in the quest for the highest possible level of performance?.

Schumacher, who turns 17 next month, said: “Prema Powerteam for me is the perfect next step on my way to go for the best performance and to become a complete driver.

“The team is very experienced and open, and everybody is really good in working closely with us drivers – plus there is Angelo who is behind every detail.

“It already is a lot of fun to work with the team, and I look forward to this challenge and to sharing?a cool experience together. I am very proud to be a part of Prema.”

Initial tests with Prema triggered speculation linking Schumacher with the Ferrari Driver Academy, partly as a result of the presence of Luca Baldisseri, his father?s former engineer.

However, Baldisseri has now left his post as head of the FDA to work closely with Stroll, who also recently departed Ferrari to join Williams as a development driver.

Thus by joining Prema, Schumacher could have a relationship with Baldisseri without necessarily having any involvement with Ferrari.

Prema ran a number of FDA pupils under Baldisseri?s reign but following the departure of Stroll (whose father owns the team), that relationship appears to have cooled, with Guan Yu Zhou switching to Motopark for his move from F4 to F3.

It is with another of Michael Schumacher’s former employers Mercedes that there has been formal evidence of a connection, Schumacher Jr having appeared at its Stars and Cars end-of-season celebration event after winning a fan vote.

Mercedes supplies engines to Prema in F3, as well as to Stroll?s new mentor Williams.