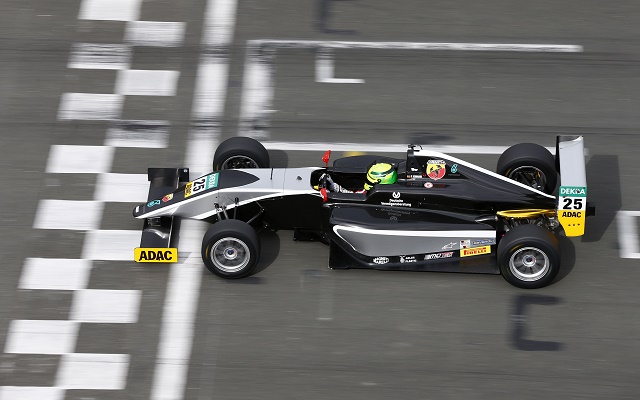 Mick Schumacher, son of F1 legend Michael, was triumphant in the third race of the inaugural ADAC F4 round at Oschersleben.

Schumacher started from second but ended up leading the race from turn one to checkered flag, ending his first competitive weekend in single-seaters with a victory.

With the top ten from race one reversed, Rotax karting star Thomas Preining lined up on pole alongside Schumacher, but was somewhat sluggish off the line, dropping also behind Tim Zimmermann.

Immediately, the safety car was needed as a multi-car crash out of turn one ended up eliminating Alain Valente and Luca Engstler.

After a somewhat lengthy clean-up, Schumacher managed a masterful restart, pulling out more than a second on Zimmermann in just one lap.

His teammate Joseph Mawson took third place off Preining and began to keep Zimmermann busy, preventing the German from attacking the race lead.

Eventually, Mawson was through and began to make quick work of Schumacher’s two-second advantage.

The Aussie, who won on his car debut in French F4 last year, eventually got very close to his teammate with three minutes on the clock.

While Schumacher defended well, him giving up the lead seemed just a matter of time when he caught a lucky break – Benjamin Mazatis spun around out of turn one and was beached in the gravel, requiring another safety car period.

There was no time for the race to be resumed and Schumacher coasted to victory, with Mawson propping up a Van Amersfoort Racing 1-2.

When Zimmermann’s car failed shortly before the finish, Preining moved up to third and went on to clinch a maiden podium on his first weekend in single-seaters.

Ralf Aron continued a strong debut round in ADAC F4 by taking fourth ahead of Joel Eriksson and Marvin Dienst, the championship leader nursing a damaged front wing to the finish line.