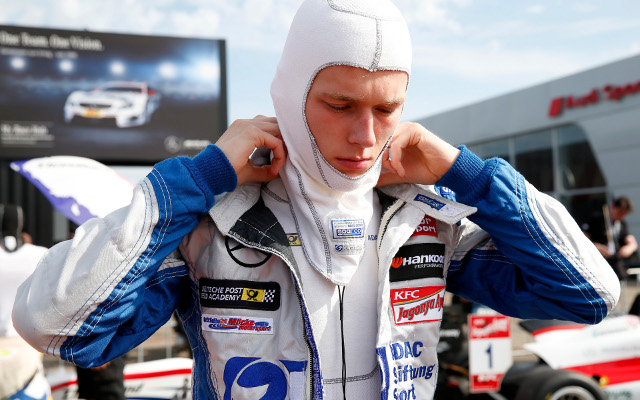 Gunther contested most of this season for Mucke Motorsport, winning at the Norisring, before leaving prior to the last round at the Nurburgring after nearly four years with the squad.

He held onto eighth in the standings despite his absence from the penultimate event.

18-year-old German driver Gunther takes over Prema?s four car, vacated by Brandon Maisano when the Frenchman split with the team during the Spielberg round in August.

Nick Cassidy occupied the seat at Portimao and the Nurburgring, scoring two podiums at the latter, but was always due to miss the Hockenheim races due to the clashing decider in Japanese F3, where he jointly leads the standings.

“Gunther has been one of the most surprising rookies of the 2015 season,” said team boss Rene Rosin.

“He is a bold driver and we saw him win and fight inside the top 10.

“He will be an added advantage for Prema, giving the team the chance to test a really promising driver.”

Gunther?s fellow German Marvin Dienst is the other addition to the field for the final round, making his F3 debut after securing the inaugural ADAC Formula 4 title two weeks ago.

Dienst will drive for the Artline Engineering squad in the second of its Artech chassis, which made its first appearance at the Nurburgring in the hands of Harald Schlegelmilch.

Gunther?s old team Mucke seems set to be down to just three cars from the five it ran earlier in the year. Felix Serralles took over the former Kang Ling car at the Nurburgring but his planned Macau Grand Prix entry has failed to materialise.

The HitechGP squad will be back for its second appearance of the season with Alexander Sims after making its bow at Portimao.